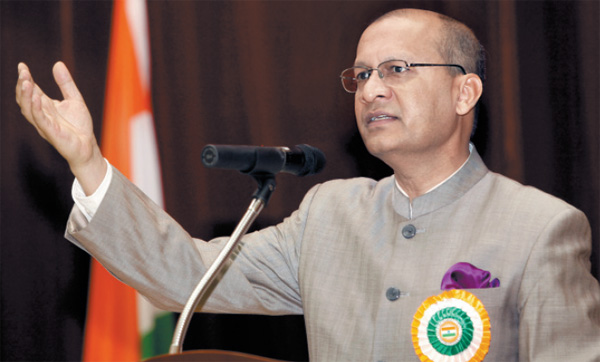 India’s Ambassador Vishnu Prakash hosted a celebration on Aug. 15 highlighting the independence days of India and Korea. By Park Sang-moon

The Embassy of India in Seoul celebrated its national Independence Day and that of Korea as well on Aug. 15 at the Indian Cultural Center in central Seoul. The Independence Day event was also devoted to commemorating the 40th year of diplomatic relations between India and South Korea.

India’s Ambassador Vishnu Prakash celebrated the national holiday by highlighting the significance of democracy in his nation.

“Our founding fathers created the first oasis in the desert of a colonized world, nourished by democracy,” he said. “Democracy is much more than the right to vote every five years; its essence is the aspirations of the masses.”

He also commented on how his country has come so far to become one of the world’s dynamic emerging economies.

Speaking to the Korea JoongAng Daily, Prakash said, “The last decade has seen India emerge as one of the fastest-growing nations in the world. During this period, our economy grew annually at an average rate of 7.9 percent.” He added that India has become self-sufficient in the production of food grain.

“It’s the first time ever that the two countries jointly celebrated their Independence Day, which is a landmark day for both Koreans and Indians,” Prakash told the Korea JoongAng Daily.

The event, attended by hundreds of Indian residents in Korea, also featured a number of cultural performances, a movie screening and a market in the parking lot to commemorate the occasion.

One of the highlights was Korean artists performing the Indian classical dances Kathak and Odissi, yoga and a special rendition of Korean traditional percussion music. Koreans and Indians together showcased different cultural traditions of music, dance and fashion.

A variety of handicrafts, traditional decorative henna, Indian dolls and dresses were on display at the bazaar in the parking lot, which was opened by the ambassador. The bazaar also featured Indian books translated into Korean and had stalls offering a selection of Indian cuisine. About 500 visitors browsed through the bazaar.

The Bollywood movie “Veer-Zaara” with Korean subtitles was shown.

The joint celebration saw an unprecedented turnout of hundreds of members of the Indian, Korean and international communities, the Indian Embassy said.

“We have been doing a series of cultural events on a regular basis,” he said. “Every two weeks, the Indian Cultural Center offers programs on food, music, dance and other topics,” he added, because the programs help “reach out to the people.”

For example, the embassy and cultural center held an Indian Food Festival at the Millennium Hilton Hotel in central Seoul in mid-May. Several prominent Indian chefs flew in to prepare a wide selection of Indian cuisine; Koreans have gradually taken to Indian food as evidenced by the large number of Indian restaurants opening around the country. And along with the food festival, a photo exhibition titled “Memory of India” by the Korean photographer Jo Jeol Kyu was displayed in May at the Indian Cultural Center.

According to the embassy, there are an estimated 7,500 Indians now living in Korea. There are 2,500 Koreans in India.