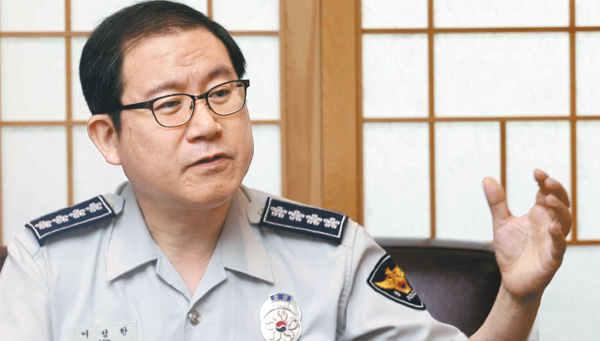 “Cold Eyes,” which went on to be one of the summer’s bigger hits, is about the Korean police’s Special Crime Unit, a unique squad that relies on advanced surveillance techniques to catch especially tough bad guys. But unlike the film, in real life, there is no Special Crime Unit in Korea.

In 2002, Lee headed the forensics department at the national police agency, and he does have an active interest in science and technology. Lee emphasizes that cutting-edge investigative methods, as exemplified in “Cold Eyes,” is something the Korean police should strive for.

Lee sat down with the JoongAng Ilbo’s national editor Jung Chul-geun on Aug. 20 and said it would be great to have a Special Crime Unit like in “Cold Eyes.” “Through information, communication and scientific techniques, a paradigm shift is needed,” Lee said.

This interview took place in the reception room of the Commissioner General’s residence in Migeun-dong, central Seoul. This is an excerpt from the interview.

Q. What did you think after watching “Cold Eyes?”

A. I enjoyed the investigations. If we formed a special unit like the Special Crime Unit in the movie, I think it would be very useful for investigating cybercrimes. But in real life there are human rights issues involved, so it would be impossible.

You once headed the Forensic Science Department. How has the department improved over the years?

I was head of the department when we uncovered the remains of the “Frog Boys” [five boys who went missing while out catching frogs in 1991]. Due to the identification procedures we used, the public paid a lot of interest. The process of identifying bodies through surviving family members was introduced, which was a breakthrough for police investigations.

Are there any new techniques being used by the forensic science department?

Most recently, we’ve implemented gait analysis, a technique we use when we can’t make out the face of a suspect caught on CCTV [closed-circuit television] cameras. With it, we can analyze how a suspect walks and compare it to a figure caught on a CCTV recording. When someone threw a petrol bomb into the residence of former National Intelligence Chief Won Sei-hoon in May, we used that method. And as a result, an arrest warrant was issued.

To conduct investigations in this era, CCTV surveillance must be an important tool.

CCTV usage is one of the main pillars of investigations. We recently opened a unified control center that tracks CCTV footage made by the police and district offices. By pooling all CCTV clips, we were able to get a closer look at crime scenes. The only downside is that the current CCTV cameras used by the police are low resolution. We are hoping to phase in 2 megapixel cameras soon.

Cybercrime is increasing at a rapid pace. What measures will you be taking against it?

We are devising something on a National Police Agency scale. For starters, we are looking at expanding the Cyber Terror Response Center to become the National Cyber Security Agency.

Once expanded, this agency will examine all cyber crimes to come up with appropriate investigative methods. We will look into a mop-up operation to clean up cyberspace, rather than just reacting to crimes. We hope to raise the bar when it comes to cybercrime investigations.

How competent are the Korean cyberpolice?

It’s the police that coined the term cyberinvestigation. Most recently, the Korean cyberpolice signed a Memorandum of Understanding with the U.S. Federal Bureau of Investigation, which shows how good it is at cyberinvestigations. Last year the FBI approached us for a joint investigation into an international bank fraud cartel that was targeting Americans. The fact that the FBI asked for our cooperation testifies to the standard of the Korean cyberpolice. They are world-class.

(The Park Geun-hye administration emphasized quite early on in its term that it would emphasize combatting the “four social evils”: sexual violence, domestic violence, school violence and unsafe foods. During the last six months, the police forces have pooled efforts on eradicating the four social evils. Despite those efforts, a public opinion poll released earlier this month by the Ministry of Security and Public Administration found that, of 1,000 adults polled, only 38.1 percent thought security had been strengthened.)

Some say the police neglected violent crimes to work on the four social evils campaign.

Police stations throughout the nation did work hard on the campaign, designating headquarters and so on. As a result, there have been a record number of criminals arrested in five areas, like robberies and muggings. But the results weren’t as big as the [campaign] publicity. I will humbly accept that we did get caught up in the publicity. From now on, we will focus on delivering results.

What about strategies for curbing school violence?

There are 681 police officers that work exclusively on school violence cases throughout the country. That’s one officer for 17 schools, but we are looking to increase the school violence squad so that one officer looks after 10 schools. We will also pay greater attention to punishing student perpetrators and helping the victims in the recovery process.

In 2020, Korea will become a “super-aged society” - where the elderly account for more than 20 percent of the population. When that happens, the safety of senior citizens will no doubt become an issue.

I read the JoongAng Ilbo series [in January] on the super-aged society and the dangers that come with it. As the population ages, there is also an increase in the number of crimes committed against the elderly. To protect seniors, a special department is needed. Each district’s police stations are planning to set up divisions to help the aged and disabled.

(Within the National Police Agency, Lee is often referred to as the “Foreign Correspondent.” Lee was counselor to the Korean Embassy in the United States from 2006 to 2009. He was External Affairs Director from 2010 and became Commissioner General this year. During the interview, he emphasized the necessity of addressing crimes committed by foreigners.)

How are you responding to crimes committed by foreigners?

There are approximately 1.5 million foreigners residing in Korea. In areas with a high concentration of foreigner populations, a lot of the crimes go unreported.

Foreigners often commit crimes against people of their own nationality and the victims often don’t report them. There are also illegal immigrants who can’t report crimes for fear of being deported. To promote the reporting of crimes, we have asked the Ministry of Justice to allow victims not to disclose their residency status.

Crimes against tourists are also rising. Apparently, there will be a tourist police unit in operation soon.

With the help of the Ministry of Culture, Sports and Tourism, it will roll out in Seoul starting in October, and then next year in Busan and Incheon. One hundred police officers will be dispatched to seven locations in Seoul, and will address issues like taxi drivers overcharging tourists and other problems frequently encountered by travelers.

Conscripted police officers that speak English will be selected. The police uniform will also be different to that of the regular police.