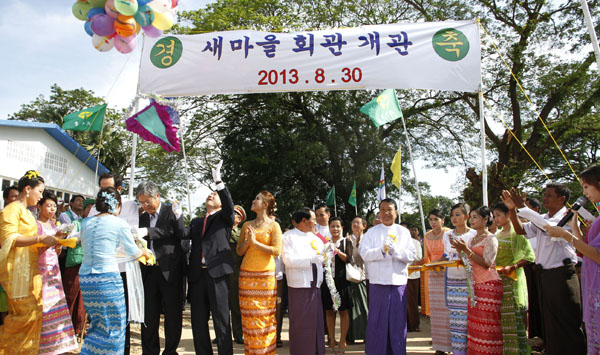 Government officials from Myanmar and Korea, including Yoo Jeong-bok, minister of security and public administration, second from left raising his hand, celebrate the opening of a Saemaul community center in Yangon, Myanmar, on Saturday. [NEWS1]

YANGON, Myanmar - The Saemaul movement, the government-led campaign in the 1970s to help people defeat chronic poverty and develop rural areas, is being exported to Myanmar, one of the world’s poorest nations with an average GDP per capita of $854 per year.

In a village about 80 kilometers (49 miles) east of Yangon, a Saemaul complex center, which the South Korean government funded with about 150 million won ($135,100), opened on Saturday.

Three South Korean government offices including the Ministry of Security and Public Administration contributed to the center along with the Myanmar government. The center has a medical clinic and library. A repair center for farming machinery will be also built with the support of Korea’s Ministry of Agriculture, Food and Rural Affairs.

“We really want to thank the Korean government for their contribution in improving our village,” a resident told the JoongAng Ilbo. “We will never forget the spirit of the Saemaul movement.”

Another village about 40 kilometers south of Yangon has been improved as well. The village still doesn’t have a decent water or sewage system and the residents breed livestock without cages. But since it was designated a model for a Saemaul project last year, the Korean government has contributed 30 million won.

With that money, local residents built a 20-meter bridge to span a stream that separates their village and farmlands. It’s a small bridge that only some cattle can go across, but residents expect it will help them farm more effectively. They have named it the “bridge of plenty.”

“Since the Saemaul movement took root in Myanmar, people in my village started voluntarily participating in a series of village improvement projects,” said a resident of the village who was educated about the Saemaul concept in Korea in May.

“I think Korea’s Saemaul movement experience can help Myanmar’s rural development,” said Yoo Jeong-bok, minister of security and public administration. “We will support an additional $22 million to the country in the next six years. Korea was able to evolve from being a recipient of aid from the outside world to become a donor thanks to the Saemaul campaign. I hope Myanmar can make same advances in the future.”

The ministry added that it will concentrate its support on a small number of countries that actively participate in the Saemaul campaign.