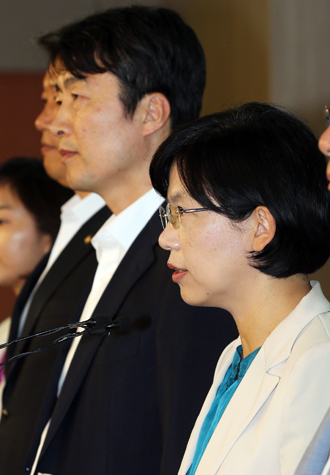 Lee Jung-hee, right, chairwoman of the Unified Progressive Party, says yesterday in a press conference that the National Assembly should not give consent to arrest Representative Lee Seok-ki, second from right, for conspiracy to rebel. [NEWS1]

A pro-North Korea faction of the Unified Progressive Party accused of conspiring to overthrow the government hoped ongoing candlelight vigils protesting the country’s top spy agency would boost anti-government sentiment felt during the anti-U.S. beef rallies of 2008, according to government sources.

According to a public security authority yesterday, UPP proportional Representative Lee Seok-ki, one of the core figures in an alleged plot to violently overthrow the Park Geun-hye government, and other members of an underground faction called the Revolutionary Organization (RO), held a meeting in Gwangju, Gyeonggi, in March.

At the meeting, they said “the time was ripe” for discord and decided to “start a propaganda war like that of the 2008 mad-cow disease scare,” where civilians took to the streets in candlelight vigils protesting against the import of U.S. beef.

Those messages, said the source, were also conveyed in a controversial May 12 secret meeting held by the RO members in Mapo District, central Seoul, attended by more than 130 participants, including Lee, in which an armed uprising was discussed.

The National Intelligence Service has been investigated for allegedly running a smear campaign on the Internet against the main opposition presidential candidate in last year’s presidential election. Opposition rallies have been held all summer against the NIS.

In a rally last month at Seoul Plaza, Kim Hong-yeol, head of the UPP’s Gyeonggi branch, called for the “parasitic NIS to be pulled up by the roots” and the uniting of the Koreas “to reflect the wishes of 70 million people.” Kim, allegedly a key figure of the RO, was one of the UPP members raided by the NIS last week.

Authorities say that the NIS and prosecutors see a good chance that the RO will be charged as an anti-government organization.

A prosecutor source said, “Because proving an anti-government organization is difficult, careful legal procedures and further obtaining of evidence is definitely needed.”

Arrest warrants were issued late Friday for the three Unified Progressive Party officials who were allegedly key figures, along with Lee Seok-ki, in a revolutionary organization plotting to overthrow the government.

Over the weekend, the UPP continued to shift its position on the explosive charges.

The three members - Hong Soon-seok, 49, vice chairman of the UPP’s Gyeonggi chapter; Han Dong-geun, 46, former Suwon chapter chairman; and Lee Sang-ho, 50, an adviser to the Gyeonggi Progressive Alliance - were accused of conspiring to topple the Park government through the RO, violating the country’s National Security Law. They are currently detained.

The NIS and Suwon prosecutors raided Lee Seok-ki and other officials’ homes and offices last Wednesday and Thursday.

Prosecutors last week disclosed a transcript of the May 12 meeting in which the participants allegedly planned a violent overthrow of the government. Initially, the UPP said that the content of the transcript was “fabricated,” but it shifted its focus yesterday. UPP lawmaker Lee Sang-kyu charged that the NIS has been spying on the party and had placed a paid informant in their midst.

The transcript released by prosecutors contains some eyebrow-raising expressions of loyalty to the Communist regime in North Korea, as well as the apparent determination to assist the North in the event of a war by destroying infrastructure such as oil storage facilities, communication centers and police stations. Participants urged each other to arm themselves with explosives our souped up BB guns.

Representative Lee Sang-kyu, a member of the pro-North faction of the UPP’s Gyeonggi Dongbu Alliance, held an emergency press conference yesterday at the National Assembly in Yeouido, western Seoul, and said the alleged informant has been “paid a large amount of money” by the spy agency and “has been active as a party member in Suwon for at least several months and at most several years.”

Lee added that the NIS informant had attended the May 12 meeting and that the transcript was transmitted by him. “As if illegal tampering with the [presidential] election is not enough, the NIS has been monitoring a political party,” he said.

An NIS official responded yesterday that it obtained the May 12 meeting transcript through “legal means” and that the UPP accusations were “groundless.” Even if the transcripts was obtained through a paid informant, however, that would not preclude it from being submitting as evidence in a trial, legal experts said.

The Democratic Party, meanwhile, is in a dilemma as it tries to distance itself from the UPP and Representative Lee Seok-ki. The ruling and opposition parties are expected to deliberate on the arrest consent motion for Lee as early as today. A spokesman yesterday for the largest opposition party emphasized that the UPP issue is separate from the issue of the NIS meddling in last year’s presidential election.

Around 7 p.m. Saturday, UPP members showed up at Seoul Station in central Seoul where moments before Democratic Party officials had been calling for reform of the NIS. Until the previous week, the two parties jointly protested the NIS’s alleged intervention in the presidential election. Kim Han-gill, chairman of the DP, said Saturday, “That is that and this is this,” making a distinction between the Lee case and the NIS campaign scandal and also apparently drawing a line between the two opposition parties.

In a telephone poll conducted by the JoongAng Ilbo on Friday and Saturday of 298 National Assembly representatives, 65 percent of the 106 ruling Saenuri Party members surveyed said they believe “a rebellion conspiracy” was plotted. Only four responded, “It was not quite an insurrection conspiracy but still a violation of the National Security Law.” Nearly 88 percent of Saenuri members agreed that an arrest warrant motion against Representative Lee should be passed in the National Assembly. In contrast, 91 percent of the 70 Democratic Party members declined to respond to the question. Only one representative agreed that there was “an insurrection conspiracy plan.”