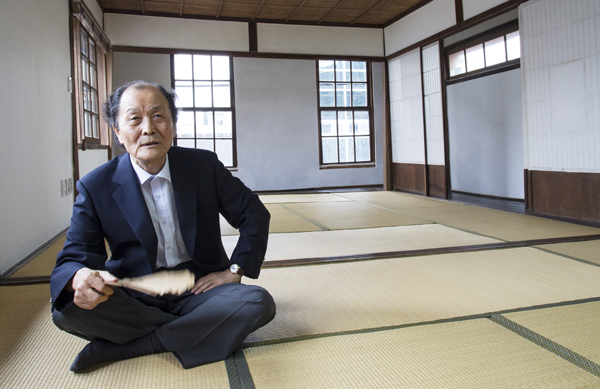 Best-selling writer Jo Jung-rae’s latest book, “Jungle Manli” or “The Great Jungle,” has reached the top of the best-selling book list on YES24, one of the country’s largest local book distributors.

Jo said the timing couldn’t be more dramatic as his new book displaced Haruki Murakami’s “The Colorless Tsukuru Tasaki and the Year of His Pilgrimage” from the top spot on Aug. 15, Korea’s Liberation Day this year. Murakami is a popular Japanese author.

Jo is best known for his saga, “The Taebaek Mountain Range,” which was published in 1989 and depicted ideological conflicts between the South and North from Korea’s liberation from Japan’s colonial rule in 1945 until the aftermath of the 1950-53 Korean War. The 10-volume saga focuses on recreating the lives of people who experienced turmoil in Korean history.

He later wrote “Arirang” and “Han Gang” to reveal the struggles of Koreans during the Japanese colonial rule and during Korea’s industrial development and establishment of democracy after the end of the Korean War.

Seven of his books have been translated into other languages, including English, French, German, Italian, Japanese, Spanish, Chinese, Russian and more.

“Jungle Manli” depicts events in China, as many local Korean companies have moved there to do business.

Meanwhile, the veteran writer visited Beolgyo in South Jeolla on Friday to meet his fans at the Taebaek Mountain Range Literature Museum and shared his thoughts about writers’ responsibilities.

“Writers steal others’ souls and express it in words,” said Jo. “As it is an extremely hard job to do, writers must endure pain that hits their threshold.”

The meeting was organized by YES24, which hosted its ninth camp in which big-name writers and newly rising writers meet with fans each year.

Before meeting with his fans, Jo sat down with reporters at the Taebaek Mountain Range Literature Museum. 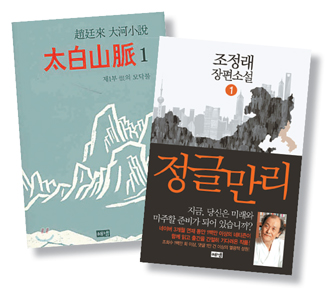 Q. You have often written novels that are rather long, while it seems like that trend has died among writers outside of Korea. Why is Korea still a market for long novels?

A. I think it is because many writers come from countries whose land has not been taken away so often or who have experienced or witnessed less conflict that came from a historical background. Hence, it is hard for the market to see some long saga or epic novels. As a citizen of a country which experienced almost one invasion, regardless of size, every five years in its history, I want to remind the world that the history in which the stronger force overwhelms the weaker should be stopped through my writings.


What do you think is the major difference between writers in Korea and in overseas countries?

Writers in other countries seem to take active roles in promoting their works. They have participated in book readings, especially novels as well, while writers in Korea seldom do it unless they have written poems.

About 90 percent of them say that they can’t be a writer after having visited here, saying that if it is that hard to become a writer, they can’t do it anymore. I think it’s better as it is helping people who are not sincere about becoming a writer realize quickly that it is not the way for them.


Do you meet a lot of young writers?

I meet them through their writings. Meeting them in person doesn’t necessarily mean that I get to know them any better.


What do you think about young writers these days?

Many of them seem to focus on writing subjects that are easily sellable and write from a first-person narrative. Although literary works are cultural products that can be consumed and easily-read books are what the public’s taste reflects these days, writers should be the ones leading readers what to read, instead of just offering them what they want to read.


Let’s talk about your newly published novel, “Jungle Manli” or “The Great Jungle.” How did you write a novel that includes stories of people living in China, while you have not lived there? 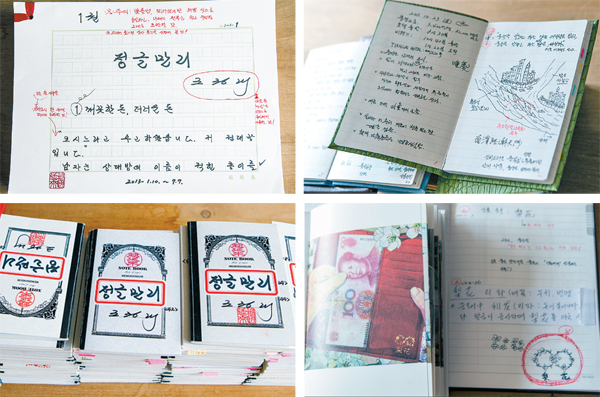 Photos of the manuscript and drawings from “Jungle Manli” or “The Great Jungle,” which has sold 380,000 copies as of the end of August. [JoongAng Ilbo]


Would you write again about the lives of people in countries you have never lived in?

Within the next seven or eight years, the background of my writings will expand to India, Israel or other countries in the Middle East. After I have written about people hurt by historical facts within Korea in Taekbaek Mountain Range and Hangang (lives before and after the Korean War and industrial development), I will now talk about the pain found in the new generation among people who have left their hometowns to go overseas to build their lives there.

I will talk about the fierce struggle to survive in the current times and by doing that I will present ways to the future.


Do you have plans for all your future works?

I’m going to continue to approach conflicts and hot issues rising in the current times. The works I publish usually comes from about 20 years of planning and deliberation. I have plans for my last work, and that is an idea that I have been developing in the past 40 years.


What responsibilities do writers have?

The fact that writers are often called a generation’s light and compass means that writers are asked to show the meanings of lives and social responsibility in that time period. However, not all writers deserve such a title. Each and every writer should work on their literary skills to live up to such a title. I think writers are to experience aches found in that society and then deliver such pain and propose ways to overcome it.


You are now in your 70s. How can you stay healthy?

I eat less and stretch every morning. I stretch and do other exercises 10 times a day. I got a physical checkup in July after I finished writing “Jungle Manli,” and the results indicated that I have the body of a person in his late 40s. So I thought I could work about 10 more years.


Many writers enjoy occasional alcoholic drinks to get inspired. Do you enjoy drinking as well?

If you have done certain things for about 10 years, that is about enough. I have done the same, but I don’t do that anymore. If you were to be able to talk about (Ernest) Hemingway and (Jean Paul) Sartre, those topics go away after shot after shot.


Have you thought about writing some romantic novels?

I will write one when I can do better than Chunhyangjeon (a Korean folk tale whose author and composition date is unknown.) It is a novel that screams social reform but it was beautifully covered with romance as the son of the noble family falls in love with the daughter of the lower class in historical times. Hence, until I can do romance better than Chunhyangjeon, I cannot help but write other novels that directly reveal the subject.


What is the biggest mistake in your life?


Tell us more about your next book idea.

I will instigate teenagers to resist their parents if they pressure them wrongfully and pursue what they want to do with their lives if they have discovered their dreams. These days, parents even send out text messages to their children every day and hour, listing all the studies they have to do that day. I need to rescue teenagers from Korea’s educational and social systems. The target readers will be teenagers and parents with teenagers. I have permission from my grandson to write about this. He said his friends will welcome the arrival of my next book.


What do you want to tell people who have not yet discovered their dreams?

They need to get exposed to stories of some of the greats who have done so. Show Park Ji-sung’s feet and ballerina Kang Su-jin’s feet, and they may look so different from other people’s feet. I don’t believe in talents but in efforts. Read to children about those people who have achieved something in their fields. That is why reading is so important.