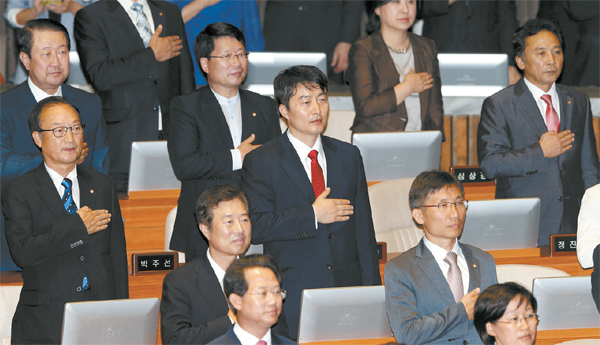 Embattled lawmaker Lee Seok-ki, center, of the Unified Progressive Party, who faces arrest on charges of an insurrection conspiracy, pledges allegiance to the nation as the National Assembly’s session opened yesterday. In the past, Lee refused to sing the national anthem in his allegiance pledge, but he sang the national anthem yesterday. The legislature has to decide whether to give its consent to Lee’s arrest by Thursday. [NEWSIS]

The National Assembly yesterday received the Park Geun-hye administration’s request for its consent to arrest a far-left lawmaker accused of conspiring to overthrow the South Korean government.

The key to the arrest lies with the opposition Democratic Party, and it has until early Thursday afternoon to decide which way to vote.

President Park signed the request earlier in the morning to seek the legislature’s consent to take Representative Lee Seok-ki of the Unified Progressive Party into custody for an investigation into his alleged plotting of a violent overthrow of the South Korean government, along with other party members, in cooperation with North Korea.

Shortly after Park’s signing, the motion for Lee’s arrest arrived at the National Assembly. Lawmakers were then briefed about it at a main session.

The National Intelligence Service and the prosecution launched an unprecedented probe into key members of the leftist opposition party, including Representative Lee, on charges of conspiring to commit insurrection and violating the National Security Law.

Homes and offices of the primary suspects were raided and some were arrested. Lee was accused of creating a secret pro-North group, known as the Revolutionary Organization, or RO, and plotting to overthrow the government, including a plan for an armed uprising.

For the Park government to take Lee into custody, the National Assembly’s approval is a must because a lawmaker is immune from arrest while the legislature is in session.

According to the National Assembly Act, the request should be voted 24 hours after and within 72 hours of the time when it is reported to the main session. More than a half of the incumbent lawmakers must attend the voting, and a majority vote is required for the motion’s passage.

Along with the request for the legislature’s consent to approve Lee’s arrest, the prosecution also submitted about 80 pages of detailed charges against the 51-year-old proportional representative. The statement disclosed more of Lee’s comments allegedly made in a series of meetings of the suspected pro-North revolutionary group. 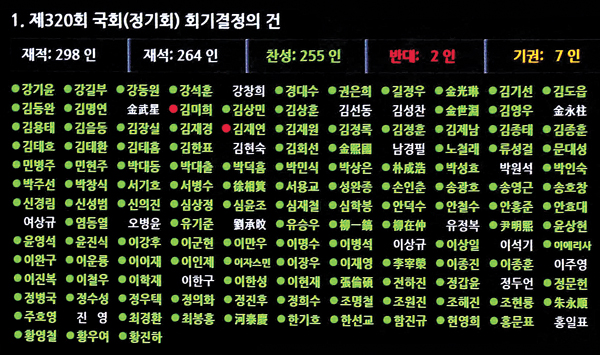 A display shows the results of votes to open the session of the Assembly from Sept. 2 until Dec. 10. In the vote, 255 approved the opening, two objected and seven abstained. [NEWS1]

The NIS and prosecutors said that Lee formed the UPP and infiltrated the National Assembly as a proportional representative to stir up revolution against South Korea based on pro-North sentiments.

The arrest request submitted to the National Assembly by the Ministry of Justice yesterday said the suspect “penetrated the UPP” and tried to “build the foundation of an uprising” in South Korea. The document further said that the RO “is comprised of district and proportional lawmakers of the UPP” and six aides and secretaries to UPP lawmakers.

The NIS and prosecutors said that Lee’s plot to stir up an armed resistance likely dates to when North Korea said it was withdrawing from the cease-fire agreement that ended the Korean War in 1953.

Pyongyang announced that on March 5.

After becoming a proportional representative, Lee attended the controversial May 12 meeting of the RO in Mapo District, western Seoul. The transcript released by prosecutors revealed a determination to assist the North in the event of a war by destroying infrastructure such as oil storage facilities, communication centers and police stations and urging participants to arm themselves with explosives.

At the May 12 meeting, he allegedly said, “We have to cut off thesystem where we bear the yoke of U.S. imperialism and make a new system, and so we made a progressive party from the bottom up.”

According to the arrest request, Lee told the members of his underground faction to attack “if an order for an all-out attack is made, with a sense of speed and unity, with the strength of a powerful body.”

Other members also made inflammatory comments at the meeting. Lee Young-choon, a Gyeonggi branch party member and one of 18 officials whose home and offices were raided by prosecutors last week, said “the movement of U.S. soldiers has to be analyzed” in the military base city of Dongducheon, Gyeonggi.

There was even discussion of whether the group’s members needed to be armed with guns.

Prosecutors determined that Kim Jae-yeon and Kim Mi-hee, UPP lawmakers, were among six RO members that infiltrated the National Assembly.

Meanwhile, Lee Jung-hee, chairwoman of the UPP, began a hunger strike to protest the motion to arrest Lee Seok-ki in front of the National Assembly in western Seoul.

“Whether or not you agree with Representative Lee Seok-ki’s thoughts, if you believe in democracy this witch hunt has to stop,” she said at a press conference.