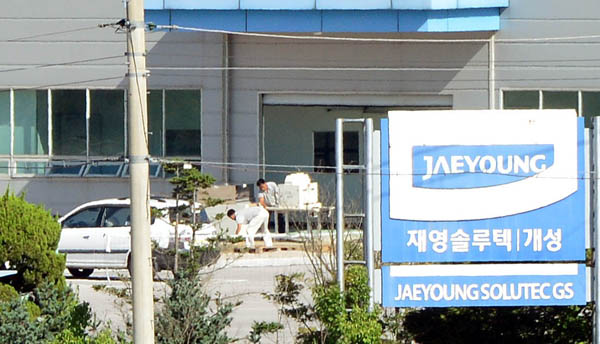 The first meeting of the South-North joint committee for the Kaesong Industrial Complex was held yesterday, with discussions over a timetable to restart the joint venture and how each side will oversee the complex once it is reopened.

Yesterday’s meeting at the support center of the Kaesong factory zone came 19 days after the two Koreas reached an agreement on normalizing operations at the suspended joint factory and forming a 12-person South-North joint committee in charge of running the complex.

“I find it meaningful that we are having the first joint committee meeting today after seven rounds of talks [on resuming the Kaesong park operations],” Kim Ki-woong, Seoul’s chief negotiator leading a five-person delegation, said at the beginning of the first talk at 10 a.m. yesterday.

“I wish to work for the development of the industrial complex as if we were to work from scratch.”

Kim’s North Korean counterpart was Pak Chol-su, a deputy director of the Special District Development Bureau, who faced off against Kim during the multiple rounds of talks on reopening the park.

There was an expectation early yesterday that he two sides could agree on a timetable to reopen the park. The North has called for an immediate resumption while the South demanded that specific plans for further development be discussed before the resumption. The negotiators resumed their talks at 8 p.m. after holding two rounds of talks earlier yesterday.

At the meeting, the Seoul delegation handed its draft proposal for the formation of a permanent secretariat under a new joint committee to their North Korean counterparts.

The two sides also mulled over ways to compensate South Korean firms that suffered losses incurred by the five-month suspension of operations.

The creation of a joint committee will enable Seoul to engage in the running of the park, which was previously run solely by the North Korea’s General Bureau for Central Guidance to the Development of the Special Zone. The Park Geun-hye government hopes the joint committee will prevent a recurrence of such a unilateral move by Pyongyang in the future.

South Korean businessmen who visited the park for maintenance work expressed high hopes for a timely resumption of the complex operations.