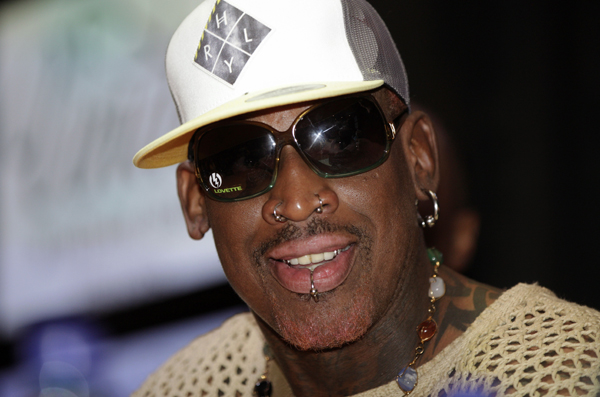 Former NBA star Dennis Rodman, who made headlines during a bizarre visit to North Korea in February, said in an interview that he will work for the release of detained Korean-American Kenneth Bae and is confident he will have a chance to meet with North Korean leader Kim Jong-un.

“I will definitely ask for Kenneth Bae’s release,” said Rodman in an interview Thursday with the Huffington Post. “I will say, ‘Marshal, why is this guy held hostage?’ I could try and soften it up in that way. I’m pretty sure I’ll be talking to him soon,” Rodman told HuffPost Live, referring to Kim.

Rodman said he had informed the North Korean leader of an upcoming trip to Beijing, which is “just a hop, skip and a jump from North Korea.”

At a time when relations between Washington and Pyongyang were strained following North Korea’s third nuclear test, Rodman made an unlikely visit to North Korea with the Harlem Globetrotters for an HBO documentary series in February. The retired Basketball Hall of Fame professional claimed on his return that Kim was a “friend for life” and that the two share a love of basketball.

On Saturday North Korea said it withdrew an invitation for U.S. envoy Robert King to visit Pyongyang to request an amnesty for Bae, blaming a joint U.S.-South Korean military drill.

King, special envoy for North Korean human rights issues, was attempting to secure the release of Bae on humanitarian grounds taking into account the deterioration in Bae’s health, the U.S. State Department said.

Rodman has told media previously he was planning to return to North Korea in August to seek the release of Bae, a tour operator who was sentenced to 15 years of hard labor for alleged crimes against North Korea.

Rodman said if Bae is released, “I’d be the most powerful guy in the world.” He brushed off a question about unconfirmed reports that Kim’s former girlfriend and other musicians were executed recently by a firing squad for involvement in pornography and possessing Bibles.

“We talk about basketball and life,” Rodman said. “I’m not over there to be a spy.”