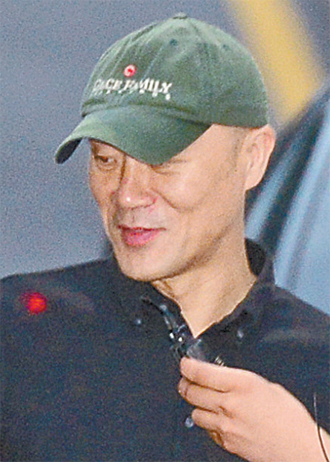 A file photo of Chun Jae-yong, who arrived at the Seoul Central District Prosecutors’ Office at around 7:30 a.m. yesterday to be questioned about alleged tax evasion. [NEWS1]

Chun Jae-yong entered the Seoul Central District Prosecutors’ Office at around 7:30 a.m. yesterday to be questioned over alleged tax evasion in a land transaction.

The prosecutions' summoning of the younger Chun came a day after the investigation team raided the headquarters of DongA One, a flour milling company headed by the father-in-law of Chun’s third son, Jae-man, over allegations that the company used some of the former president’s secret funds.

The prosecutors suspect Chun junior evaded a gift tax when he purchased a 460,000-square-meter (113.6-acre) plot of land in Osan, Gyeonggi, from his now-jailed uncle Lee Chang-seok, a younger brother of former first lady Lee Soon-ja, for 2.8 billion ($2.54 million) won in 2006.

The amount was one tenth the assessed value of the property.

The prosecutors pressed the 49-year-old son on the source of the money he used to purchase the land from his uncle. They suspect it came from his father’s hidden assets and that the deal with his uncle was made to evade a gift tax.

Jae-yong’s appearance at the prosecutors’ office yesterday marked the first time that a child of Chun was called in for questioning over alleged involvement in managing Chun’s secret assets.

Park Sang-ah, Jae-yong’s wife and a former TV actress, was also questioned by prosecutors last Saturday about the purchases of two luxury houses in Atlanta and California in 2003 and 2005.

Thanks to the so-called Chun Doo Hwan Act passed in June by the National Assembly, the government is able to confiscate assets not only of the former president but also his family members or associates who acquired wealth from Chun and knew it came from illegal sources.

Following the passage of the special law targeting the 82-year-old Chun, the prosecutors launched a full-fledged probe into hidden assets held by Chun and his family members, raiding homes and offices of a number of people related to Chun and putting his brother-in-law in custody on charges of tax evasion.

The former president was convicted in 1997 of accepting bribes and running slush funds during his seven-year presidency in the 1980s.

He was ordered to pay 220.5 billion won in fines and has an outstanding balance of 167.2 billion won for the unpaid fine. The government wants to use any confiscated assets to pay off the fine.