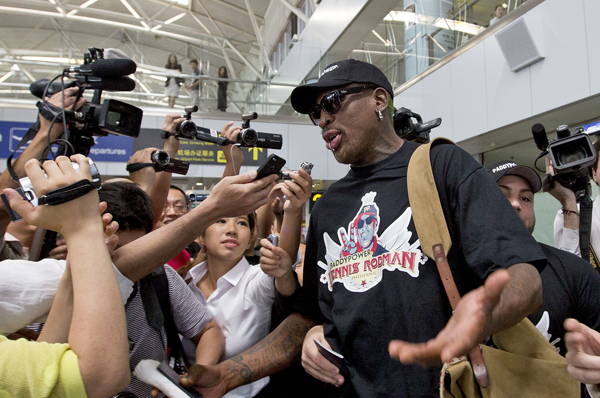 Former NBA star Dennis Rodman, center, speaks to the media at the departure hall of Beijing Capital International Airport yesterday. Rodman is heading to North Korea for the second time this year for what he says is a visit to his friend, the Communist nation’s leader, Kim Jong-un. [AP/NEWSIS]

BEIJING - Former NBA star Dennis Rodman said yesterday he was going on his second North Korea trip this year to have what he calls a friendly visit with the country’s authoritarian leader, Kim Jong-un.

The trip by the flamboyant basketball player comes days after North Korea rejected a visit by a U.S. envoy who had hoped to bring home an American jailed there, Kenneth Bae.

Speaking to reporters at Beijing airport before leaving for Pyongyang, Rodman declined to say whether he would seek Bae’s release. “I’m not going to talk about that,” he said.

“I just want to meet my friend Kim, the marshal, and start a basketball league over there,” Rodman said. “I have not been promised anything. I am just going there as a friendly gesture.”

Bae was arrested in November and sentenced to 15 years of hard labor for what Pyongyang described as hostile acts against the state. Rodman once asked on his Twitter account for Kim to “do me a solid’’ and release Bae. Kim has the power to grant special pardons under the North’s Constitution.

Rodman first met Kim, a basketball fan, during a visit in February to promote the sport and make a film. U.S. officials frowned upon the trip for giving the young leader a propaganda boost.

In the weeks that followed, after UN sanctions imposed in early March over Pyongyang’s February nuclear test, North Korea threatened Washington and Seoul with nuclear and missile strikes and shut down an inter-Korean factory in the North.

Rodman, however, suggested “basketball diplomacy” could warm relations and said that Kim wanted President Barack Obama to pick up the phone and call him. He has called Kim an “awesome guy.”

Rodman’s trip comes as the rival Koreas pursue diplomacy meant to restart several cooperative projects that were scrapped as tensions rose in recent years, including the jointly run factory complex in the North Korean border city of Kaesong.

Outside analysts have said Pyongyang is likely using Bae as bait to win diplomatic concessions in a standoff over its nuclear weapons program. North Korea denies this.

Pyongyang accuses Bae of trying to establish an anti-Pyongyang base in the North. Friends say Bae was based in a Chinese border city and traveled frequently to North Korea both as a tour operator and to feed orphans.

At least five other Americans have been detained in North Korea since 2009. The others were eventually allowed to leave without serving out their terms, some after clemency missions by prominent Americans, including former presidents Bill Clinton and Jimmy Carter.