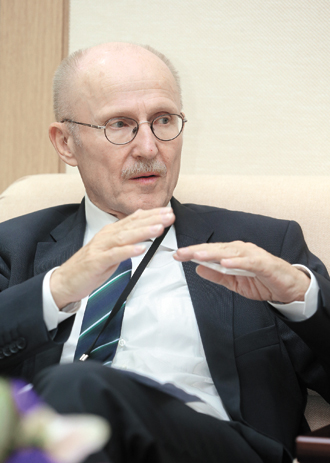 As a special advisor on Sport for Development and Peace to United Nations Secretary-General Ban Ki-moon, Wilfried Lemke has sought to promote sports as a means of easing tensions among countries.

He now tries to deliver the mission to the two countries where such efforts are perhaps most needed: North and South Korea.

In July, the UN sports advisor visited North Korea in what was the first high-ranking UN visit in two years. The visit came after Seoul proposed to field a joint Korean team for the 2015 Summer Universiade.

Organizers of the university sporting event, held in Gwangju, said they had won permission for a unified Korean team from the International University Sports Federation. They wanted Lemke to help negotiate an agreement to that end between the two nations.

Although North Korea has yet to respond, Lemke said the project has got off to a fresh start.

“We’ve seen positive signals from North Korea. They sent their youth to the youth program. It’s not easy for them to accept,” he said. “This is extraordinary and an extremely positive sign.”

During his four-day trip, Lemke met with ranking North Korean sports officials, including the minister of sports and the chairman of the national Olympic committee, and representatives of the football federation and the women’s sports committee. He asked Pyongyang officially for the participation of four North Korean youths at the Youth Leadership Program.

Three North Korean teenagers took part in the UN-hosted youth program, the seventh of its kind, which will run through Sept. 13 at Honam University in Gwangju.

Hosted by the United Nations Office on Sport for Development and Peace three or four times a year, the new program provides leadership training for people between the ages of 18 and 25 from developing countries.

Lemke also cited his warm welcome by the North as a good signal.

“They welcomed us in a nice way. Everything we asked for, they agreed to. We wanted to speak to someone in the women’s sports field and one who was responsible for the Paralympics, and they organized the meetings,” he said.

But he stressed that the two countries will now have to take the reins and work together. “My mandate as a UN special advisor is to be a representative, facilitator and advocator to promote sports as a tool for development and peace,” Lemke said.

“The next step is to convince both governments to meet face to face. The UN can build a bridge. On that bridge, both sides should work together. I can just invite [the two Koreas] to start walking onto the bridge, but talks should be held by the responsible authorities from the South and the North.”