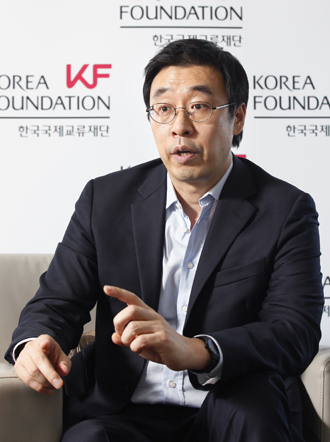 Korea’s image abroad has improved greatly over the past two decades, but there is still a long road ahead, said the new president of the Korea Foundation, Yu Hyun-seok. Yu, 50, spoke with the Korea JoongAng Daily on Aug. 26 in his office in Suha-dong, Seoul. He said that on a recent business trip to Germany, he was shocked to learn that Korea had been ranked last by Germans in a BBC survey on perceptions of 22 nations.

A political scientist formerly at Kyung Hee University, Yu was inaugurated in May as the 11th president of the foundation. He received an undergraduate degree in politics and foreign relations at Yonsei University and a doctorate in political science at Northwestern University. He has served as a government policy analyst, including at the Ministry of Foreign Affairs.

Last week, the foundation hosted “Rhapsody in Blue,” a free international music festival at the Cheonggyecheon Hanbit Park. He is also busy with several other projects, including a week-long exchange for Korea-Japan university students which began Monday and the Korea-China Public Diplomacy Summit on Sept. 24.

In addition to sponsoring forums, seminars and lectures, the foundation also promotes international cultural, diplomatic and educational exchanges. It promotes Korean studies in foreign universities by supplying visiting professors and underwriting fellowships. Its flagship Global e-School program, Yu said, is a project he is especially proud of.

That online school offers video lectures on Korean history, culture and business, and workshops and seminars. The program’s network includes 64 universities in 27 countries as diverse as Indonesia, Vietnam, Russia, Germany and Argentina.

But the foundation, a non-profit group founded in 1991 under the Ministry of Foreign Affairs, faces problems in its public diplomacy work. Yu complained of a 6.8 percent budget cut and lackluster support among the general public here.

Q. It’s been almost four months since you were appointed president of the Korea Foundation, and you have traveled abroad for many foundation events. Are there any memorable experiences?

A.I have been involved with the foundation for a long time, both as a professor and an advisor. But I have realized more than I did before that there is a general lack of public awareness of what we do. For example, we sponsored a forum overseas, and one of our guests came up to me to say he had had a great experience thanks to Korea International Cooperation Agency. I corrected him, but he asked, “Aren’t they the same thing?” I told him Koica provides aid while the Korea Foundation focuses on public diplomacy to promote Korea. I realized then that even those who participate in our events do not understand us very well, so consider what the general public thinks. I regret that.

So, what do you see as Korea’s image abroad, and are there any aspects that need work?

Korea’s image has improved, but there are two problems: The image has not changed as much as we want it to. I was shocked when I visited Germany and saw that a BBC survey of German perceptions about 21 other countries ranked Japan first and Korea last. That tells me that Korea still carries the stigma of authoritarian rule, war and poverty. There is still plenty of room for us to improve Korea’s image. Secondly, the image of Korea has improved, but it is too focused on hallyu (Korean pop culture). Truthfully, Korea has much more to show besides hallyu and K-Pop music. We have classical Korean music and fusion music, art and dance, which are very popular with people in Southeast Asia.

Despite Japan’s poor international image after World War II, it has come a long way. How was that possible?

Its image was the worst then, and Japan still hasn’t apologized for its historical misdeeds, but the fact that Japan continues to rank top five [in such surveys] shows that they have tried very hard since the end of World War II to win the hearts of the world. The Japan Foundation has been vigorous in its public diplomacy for 40 years, which has boosted Japan’s image. I always say that giving aid to developing nations is very important because we are a country that has overcome poverty by receiving aid, so Koica is important. But on the other hand, winning the hearts of the world is very important as well, which is the foundation’s role. They go hand in hand.

The Park Geun-hye administration has emphasized public diplomacy. What role does the foundation play in this policy?

We are the most important organization for public diplomacy in Korea. Currently our main capacity is as an implementation agency, but I believe that public diplomacy needs strategy and planning, aspects we need to strengthen. The administration promotes people-to-people diplomacy, and we have to focus our attention on the notion that public diplomacy should not end simply with promoting Korea but should contribute to the happiness of the people. The Korean people are not recipients of aid from Koica, but the foundation actually has the capacity to benefit Korean society.

The best method of communications in people-to-people exchanges is culture, whether pop culture or fine arts. Outbound projects are important, but inbound ones are also, in order to foster a global awareness among the Korean people.

What are the most important short- and long-term goals?

The most important items [in the short term] are, as the current government emphasizes, promoting public diplomacy with the people and bolstering the influence and participation of the people. Also, we want to build more efficient projects by using new media such as the Internet. Partnerships are important as well, with us representing the public sector, while working with private sector groups such as businesses, universities and academic institutions, such as our Public-Private-Academic Partners program. When we tackle projects on our own, we sometimes lack money and influence. Also urgent is to reflect new trends in Korea. Until now, we had focused on the United States, Europe and other developed nations, but now the Association of Southeast Asian Nations countries, South America, Africa and other developing nations are important.

[In the long term] we need to establish an identity of our own; if we don’t our survival may be questionable in the future.

What is your pet project in the Korea Foundation?

What I personally am proud of is the Global E-School, which is an efficient 21st century business model, is available to a great number of people at low cost and is constantly being upgraded. If one professor is sent out to lecture, everybody has to listen to lectures on his subject. But through the e-school, you can send lectures on many different subjects.