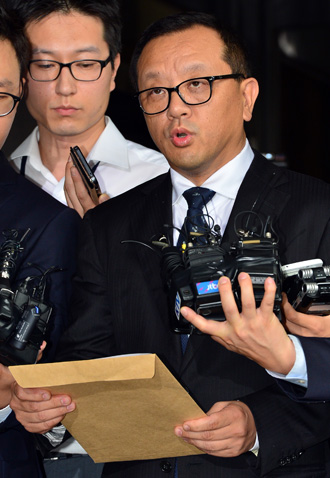 Chun Jae-kook, eldest son of former President Chun Doo Hwan, delivers a rare apology to the people yesterday in front of the Seoul Central District Prosecutors’ Office before he submits a family plan to pay his father’s unpaid fine. [NEWSIS]

After years of avoiding a massive criminal fine for misdeeds in office, former strongman Chun Doo Hwan and his family have agreed to pay off 167.2 billion won ($154 million) and will give the state a list of assets it can seize, including the family’s ancestral mountain that also contains its graveyard.

The only request made by the former president is that he and his wife be allowed to live out the rest of their days in a pricey house in Yeonhui-dong, even if the government takes it over.

The family was clearly giving in to an unprecedented assault by prosecutors on its assets, suspected to be tied to illegal wealth accumulated by the former dictator. This was allowed by the National Assembly, which passed a special law in June.

Chun Jae-kook, the former president’s eldest son, appeared at the Seoul Central District Prosecutors’ Office at 3 p.m. yesterday and announced how the family planned to pay the balance of the massive fines. He read off a list of family assets to be handed over to the state.

“This is a list of assets that the family has come up with following a long deliberation,” said a grim-looking Chun.

The list also included the two-story residence Chun and his wife Lee Soon-ja have occupied in Yeonhui-dong for decades.

Lee Hi-sang, chairman of DongA One and the father-in-law of third son Chun Jae-man, also agreed to hand over financial assets worth 27.5 billion won to the government.

The total value of the assets promised to the state was estimated at 170.3 billion won by Jae-kook, about 3 billion won more than the balance of the fine.

Standing before a throng of reporters, Jae-kook apologized to the nation.

“In regard to the unpaid fine, I apologize to people on behalf of my family for causing concerns,” said the 54-year-old son. “I am deeply regretful that it took so long to settle the issue because of my shortcomings and practical difficulties.”

It was the first time anyone in the Chun family apologized for the unpaid fine. After reading a written announcement, which lasted about two minutes, Jae-kook entered the prosecutors’ office without taking questions from reporters and submitted a detailed payment plan to prosecutors.

Former President Chun did not appear at the prosecutors’ office because of security and health concerns. 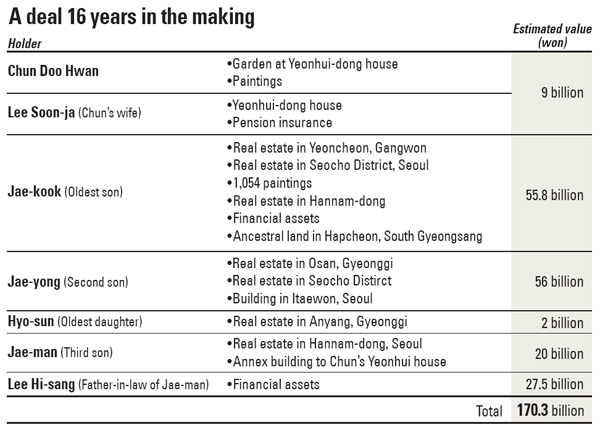 The prosecutors launched a special investigation team in May devoted to collecting assets from the disgraced former president.

It was emboldened by the passage of the so-called Chun Doo Hwan Act by the National Assembly in June. The new law allows the state to confiscate assets not only of the former president but also his family members or associates who acquired wealth from Chun.

In a rare display of bipartisan support, the Assembly passed the act in a 227 to 2 vote.

Homes and offices of Chun, his children and relatives were raided by prosecutors, and Lee Chang-seok, a younger brother of former first lady Lee Soon-ja, was put into custody and indicted last week on alleged tax evasion.

Chun’s second son, Jae-yong, was grilled for more than 18 hours over his role in managing his father’s secret wealth and tax evasion last week.

It was the first time for a child of Chun to be called in for questioning. It was expected more would be summoned. Then the family announced it would pay the fine.

Park Sang-ah, Jae-yong’s wife and a former TV actress, was also questioned last month about overseas purchases of two expensive houses in Atlanta and California on suspicion that she bought the houses with money from her father-in-law.

News that Roh Tae-woo, who helped Chun carry out a military coup in 1979 as an army general and succeeded Chun as president in 1988, finished paying his own 262.8 billion won fine last week also pushed Chun into paying up.

In 1997, Chun was convicted of accepting bribes and running slush funds during his seven-year presidency and sentenced to life in prison. He was ordered to pay a 220.5 billion won criminal fine.

Chun was released in December 1997 with a special pardon granted by former President Kim Young-sam.

In 2003, Chun famously said he couldn’t pay any more of his fine and that his entire wealth amounted to 290,000 won. The remark was the object of widespread public ridicule.

The 82-year-old former president ordered a brutal crackdown on the 1980 uprising in Gwangju, which left some 200 people dead and gave birth to the national struggle for democracy in the 1980s. Animosity toward Chun still runs deep in Gwangju.

Following the crackdown during the Gwangju Uprising, Chun became Korea’s 11th president and put the country under autocratic rule for seven years.

Chun stepped down from the presidency in February, 1988.