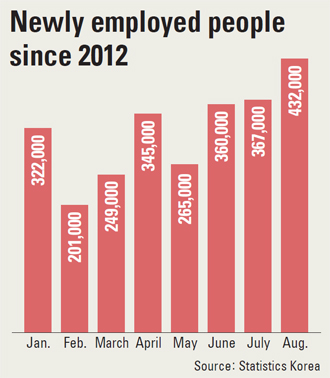 For the first time in 11 months, the number of newly employed people surpassed 400,000 in August compared with a year earlier, a clear indication that the nation’s labor market is improving.

According to data released by Statistics Korea yesterday, the number of people who found jobs last month rose by 432,000. The total number of Koreans with jobs stood at 25.29 million. The employment rate for those aged 15 to 64, the OECD standard, hit 64.6 percent, up 0.3 percentage point.

The growth was led by an increased number of employed people in their 50s and new jobs in the service and agricultural sectors. Of the newly employed, 288,000 were in their 50s, boosting the group’s employment rate to 73.3 percent, up 1.4 percentage points from a year earlier.

Still, people in their 20s had difficulty finding jobs. The number of employed twentysomethings dropped by 36,000 in August, following a 80,000 decline in July. The employment rate for people between 15 and 29 stood at 39.9 percent last month, down 0.8 percentage point from the same month last year.

The manufacturing and construction sectors hired fewer people last month than the service sector, with job creation in manufacturing falling for the fifth straight month.

The Ministry of Strategy and Finance said the government’s job creation efforts for older people contributed to the growth, as well as its supplementary budget and frontloading the regular budget.

“Employment has been improving since the second quarter of this year, but whether this trend is temporary or not remains to be seen,” the ministry said.