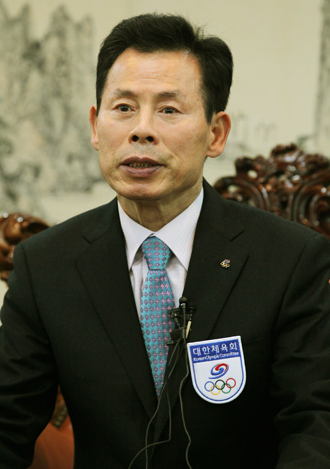 Park Jong-gil, the second vice-minister of culture, sports and tourism, resigned yesterday only six months after he was handpicked for the job by President Park Geun-hye. Park, who vowed to eradicate bribery in sports here, has been accused by an opposition legislator of forging documents related to a firearms shooting range he owns in Seoul.

The 67-year-old athlete-turned-administrator was one of Korea’s best sport shooters and was for a time the chief bodyguard of President Park Chung Hee, the father of Korea’s incumbent president. He submitted his resignation Tuesday, apologizing for “causing concern about my personal affairs related to the shooting range.”

Park’s nomination as vice-minister drew a great deal of attention when it was announced, because of his fame and connection with the president’s family. He had served as a board member of the Korean Olympic Committee, and when nominated for the ministerial post he declared his intention of “eradicating all bribery in sports” under the slogan “Sports Vision 2018.”

But on Sept. 5, Representative Kim Tae-nyeon of the Democratic Party charged that Park appeared to have forged official documents to continue running his private shooting range, located inside Mok-dong Stadium in western Seoul.

In March, when he took his job at the ministry, Park had been required to divest himself of that range; the State Public Official Act bans a government official from running a business while in office.

Representative Kim said Park tried to circumvent those rules by forging a document saying the Seoul city government had approved the transfer of the right to run that business from himself to his wife. He then submitted that document to the National Tax Service. Seoul city runs the stadium and conducts bidding for the right to run businesses there.

Park’s resignation is the continuation of a string of embarrassments President Park has faced in her nominations; in particular with people she personally wanted in several jobs. Among them are:

Kim Jeong-hun, a Korean-American who abruptly withdrew his candidacy to head Park’s new Future Ministry due to his dual nationality and rumors that his wife ran a luxurious night club in southern Seoul.

Kim Hak-eui, a former vice minister of justice, stepped down after being accused of attending a sex party.

Hwang Chul-joo, the CEO of Jusung Engineering, withdrew his bid to head the Small and Medium Business Administration because of the requirement to set up a blind trust for his assets.

Han Man-soo, a tax lawyer named to head the Fair Trade Commission, gave up his post in April after being accused of tax evasion.

And Yoon Chang-jung, the former Blue House spokesman, stepped down after he allegedly harassed a female aide during the president’s trip to the U.S. earlier this year.