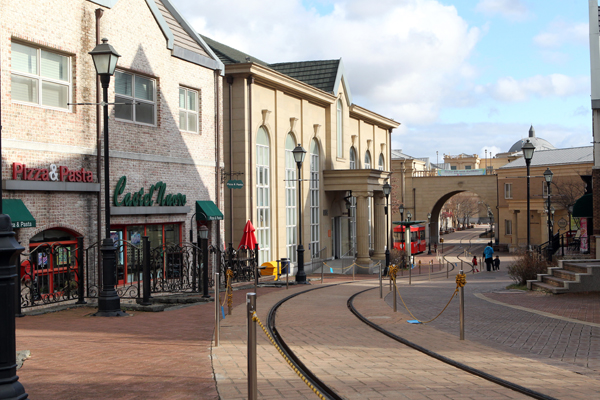 The main street of the English village in Paju. [JoongAng Ilbo]

The Gyeonggi provincial government, facing a budget crunch because of the continuing economic stagnation, said Thursday that it is studying the possible sale of its “English villages.”

Gyeonggi is looking for ways to cut its projected budget by 108.8 billion won ($100 million) this year and find ways to reduce a looming deficit.

The Gyeonggi English villages began in 2004 when the first was set up in Ansan to give Gyeonggi residents an opportunity to study English language and culture in an immersion program. The Paju village opened in 2006, Yangpyeong in 2008.

But the villages have dwindled steadily in popularity in recent years and have been plagued with operating deficits.

The 99,000-square-meter Paju English Village was in the red by 1.5 billion won last year. The Yangpyeong village, the same size, has already handed over its management to a private company.

The province is also looking into the sale of buildings now being used by eight other government-affiliated groups. The outlook for approval by the provincial legislature is unclear, however. A one-shot sale may plug an immediate budget gap but does nothing for longer-term fiscal stability.

A hopeful Gyeonggi official said, “Private enterprises are already tenants at some of our abandoned land, using it for factories and other purposes. We look forward to selling the rest of the land to private enterprises.”