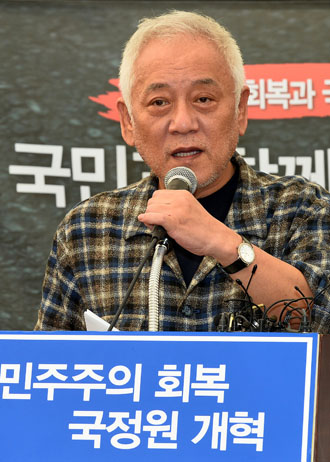 Kim Han-gill, chairman of the Democratic Party, at a press conference yesterday confirming that he will attend a political summit today. [NEWSIS]

The Democratic Party’s leader, Kim Han-gill, said yesterday he would ask the president whether there was any political pressure behind the resignation of Prosecutor-General Chae Dong-wook. On Friday, he had confirmed that he would agree to the Blue House’s proposal to include Hwang Woo-yea, the Saenuri Party chairman, in a meeting Kim had demanded with the president. After Chae’s resignation, some opposition legislators had urged Kim not to meet the president, but he said he would attend and ask blunt questions about Chae.

“I will participate in the meeting,” Kim said yesterday in a press conference at Seoul Plaza. “But I want to make clear that the main agenda item is the National Intelligence Service’s illegal involvement in politics. It is obvious that the prosecution chief’s resignation is related to that matter, and I want the president to be ready to answer questions about it.”

But the Blue House quickly quashed Kim’s proposal that the meeting be broadcast live. A spokesman said, “It’s hard to discuss issues frankly on television.” The president’s office had offered, however, to provide a report of the meeting after its conclusion.

The Blue House has been at the center of speculation about political skullduggery since the Chosun Ilbo reported on Sept. 6 that the 54-year-old prosecution chief had a 10-year-old son from an extramarital affair in July 2002. In this skein of rumors, stories of grudges against Chae abound from administration officials who resent his investigations into cases involving politicians connected with the administration, including charges that the NIS conducted a smear campaign against President Park Geun-hye’s opponent in last year’s presidential election. Therefore, it is suspected that the administration and especially the intelligence agency leaked the story of Chae’s alleged paternity in an effort to oust him.

Chae had, since then and until Friday, conducted a public running battle with the newspaper, vehemently denying the story and offering to take a DNA paternity test to prove his veracity. He also vowed to stay on as the chief prosecutor, but abruptly resigned when Hwang Kyo-an, the justice minister, announced Friday that he had appointed an independent prosecutor to look into Chae’s personal life.

“Making Chae step down from the post is obvious foul play by some people who want to avoid responsibility for the spy agency’s involvement in the presidential election,” complained Kim, the DP leader. “Our party will not just sit and watch the authorities tame the prosecution.”

A few hours before Kim confirmed that he would attend today’s meeting, the Blue House released its first comment on the prosecutor-general’s resignation through Lee Jung-hyun, senior secretary for public affairs. It appeared that the administration would not be content to allow him to resign and move on.

“The Blue House hasn’t accepted Chae’s resignation yet,” Lee said yesterday at a press briefing. “Seeking the truth about the allegations against him is the first thing to do.”

Because of charges from Democratic Party members of administration involvement in the leaks about Chae’s alleged extramarital affair, the Blue House had at first seemed reluctant to comment on the resignation. But Lee denied that there was any involvement in the Chosun Ilbo’s expose.

“It was to find the truth, not to press Chae to step down from his post,” Lee insisted, but said he did not know if the civil affairs office at the Blue House, led by Senior Secretary Hong Kyung-shik, had conducted its own investigation of Chae’s conduct of a decade ago.

“Working as a spokesman of the Blue House doesn’t mean I know everything,” Lee said.

The question was a reaction to political gossip that Hong and Kim Ki-choon, the president’s chief of staff and a former justice minister and prosecutor-general, were two of the officials most outraged by Chae’s attempts to investigate the intelligence service.

The prosecutors’ office was in disarray. The deputy chief of the internal inspectors’ office, Kim Yun-sang, resigned Saturday in protest of the justice minister’s order that an outside prosecutor be named to investigate Chae.

Kim lashed out against the minister: “He is a bad leader who has completely failed to fight against political influences, and who failed to protect the chief of the senior investigations agency. It is also insane that the ministry didn’t consider using the prosecution’s own inspection headquarters for this work. I heard about the investigation from the news media, not from the ministry or from the prosecution organization. Such a process is unacceptable and doesn’t usually occur.”

Kim’s resignation was followed by charges that politicians have meddled in the prosecutors’ independence and neutrality. In a 2,000-word letter to Justice Minister Hwang, Park Eun-jae, head of the Department of Planning and Coordination at the Supreme Prosecutors’ Office, demanded that the minister explain how the new investigation would be run.

“Opening the methods and process of the investigation is necessary because it can prove that it was not just a personal decision by Hwang,” Park said. “If it was personal, the existence of the prosecution organization is under threat.”

Prosecutors at the Seoul Northern District and Suwon District offices planned to meet internally yesterday, but put those plans on hold.

“Whether or not the Blue House has accepted the resignation doesn’t mean anything,” a Seoul Central District prosecutor said. “I think that a statement representing the thoughts of all the prosecutors on these issues will be made soon.”