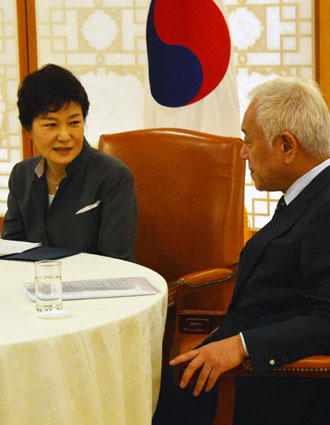 President Park Geun-hye and opposition party leader Kim Han-gill failed to reach an agreement to end the paralysis of the National Assembly at their much-anticipated meeting yesterday.

At the three-way meeting among the president, Kim and Saenuri Party Chairman Hwang Woo-yea, Kim was hoping for some sign that Park would reform the National Intelligence Service(NIS) and get to the bottom of allegations that the agency interfered in last year’s presidential election on her behalf. But he came up short.

“We exchanged lots of talk, but there was no single right answer,” Democratic Party leader Kim Han-gill told reporters when he walked out of the meeting held in the National Assembly yesterday.

“The president should issue an apology for the NIS case, although the scandal was allegedly planned under the Lee Myung-bak administration, not under her administration,” Kim said at a press meeting after the talks.

Kim vowed to continue his protest at a tent in Seoul Plaza, which has led to paralysis of the National Assembly. He changed into a black suit for the talks with the president, and then said he will go back to casual wear for the protest, which he has called “homeless fashion.”

“I will return to the tent,” he said.

Hwang of the Saenuri Party was more positive about the talks.

“As President Park talked with the opposition party [leader] with a sincere attitude, we expect to see a good achievement,” Hwang told reporters. “We talked about the Chae Dong-wook scandal and other state issues.”

The two parties didn’t issue a joint statement after the talks yesterday and even held their own press meetings afterward.

According to the Blue House, Park urged Kim to “resolve all misunderstandings” through the talks and “focus on improving the livelihood of people.”

“I was also in an opposition party for a long time,” the president said, as quoted by the Blue House. “But I think the ruling and the opposition parties have the same purpose: putting the livelihoods of people as their top priority.”

She also mentioned the DP’s rally from a tent set up in front of Seoul City Hall for more than a month to protest the NIS scandal.

“I know you have been in the tent for more than a month … Please take care of your health,” she said.

Saenuri Party leader Hwang expressed his hope for “normalization of the National Assembly,” apparently urging the DP leader to stop the protest and return to the Assembly.

“Taking this meeting as a stepping stone, I hope this kind of meeting becomes regular,” Hwang said.

According to the DP, Kim raised three main issues: The controversial resignation of Prosecutor-General Chae Dong-wook, the National Intelligence Service’s alleged meddling in the 2012 presidential election, and the president’s pledges to expand welfare.

When it came to the top prosecutor’s resignation, Kim suspected that he was forced to step down, pressured by the government, which didn’t like his handling of the NIS scandal. Kim demanded the president punish those involving the resignation, including officials at the Ministry of Justice and the Blue House, so that the prosecution could wrap up its investigation into the spy agency free from any political pressure.

If the president was not herself involved in the resignation, she should ask for responsibility to be taken by the justice minister or her senior secretary for civil affairs, who must have coerced the resignation, Kim said.

On reform of the NIS, Kim proposed to disband “the department of the domestic affairs” in the spy agency, which the DP suspects is in charge of interfering with domestic politics. And the reform of the agency should be controlled by the National Assembly, Kim said.

Additionally, Kim urged Park to keep the pledges she made during her campaign last year to expand welfare as part of her promise of “economic democratization.”

Unlike the DP’s claim that the president didn’t give any answer, the Saenuri Party said the president expressed her “strong will” to reform the NIS.

“The president said she has the strong will to reform the agency, and she will prepare a bill to reform it,” Hwang’s senior secretary Yeo Sang-kyu said. “The bill will be for reform on a stronger level than those arranged by any former administrations.”

Still, the president refused to disband the department of domestic affairs of the NIS, which is in charge of all espionage attempts against the government.

“Considering the reality that the country is facing [military threats from North Korea] and the interests of foreign countries, it is right for the NIS to pick up on any anti-government attempts and maintain its right to investigate those cases,” Yeo said. “The president mentioned that the DP also maintained the department when they were the ruling party under the former administrations, and DP head Kim accepted the fact.”

The president also said it is a matter for the National Assembly to decide whether to launch a special committee on reforming the NIS.

But Saenuri Chairman Hwang refused the idea of a special committee, as the Assembly already has the Intelligence Committee in charge of NIS affairs.

When it came to the Justice Minister’s unprecedented probe into the prosecutor-general’s alleged love child, the president said the minister did the right thing, the secretary of Saenuri Chairman Hwang said at a press meeting.

“While Prosecutor-General Chae did nothing to explain the allegation raised by the media, it was the right thing for the justice minister to exercise his right to launch a probe, the president said,” Hwang’s Senior Secretary Yeo Sang-kyu said. “Revealing the truth is a priority.”

Chae tendered his resignation on Friday after the justice minister announced an internal probe into whether he has a love child from an extramarital affair. The top prosecutor has insisted that the allegations of an out-of-wedlock son were “groundless suspicions.”

DP members have argued that the Blue House and the Saenuri Party pressured Chae to resign. The opposition also accuses the president of trying to control the prosecution too much.

Noh said the DP head also demanded an apology from the president for the spy agency’s decision to declassify a transcript of a 2007 inter-Korean summit meeting in which then-president Roh Moo-hyun effectively disavowed the inter-Korean maritime border.