Family chatter can be good for business, a DNA lab says

Family chatter can be good for business, a DNA lab says 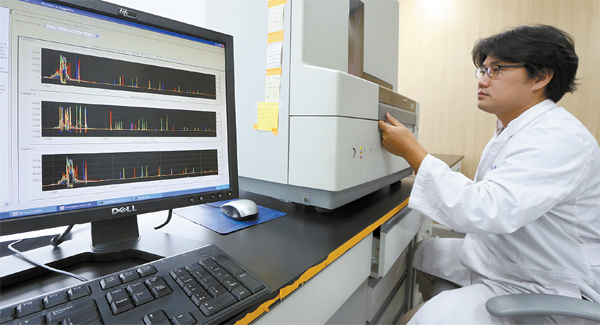 A technician at Crown Gene operates a spectroscope to match two DNA samples. By Choi Jeong-dong

The holidays are here again, and it seems that as family members dig into their holiday meals conversations tend to turn catty. The head of a company that offers DNA paternity testing said that his business spikes after the Chuseok and Lunar New Year holidays.

“Though nobody knows why,” said Park Jin-cheol, the CEO of Crown Gene in an interview with the JoongAng Ilbo. “During family gatherings over the holidays, relatives and friends always seem to comment about which parent a child resembles or doesn’t.”

Talking at his office in Seoul’s Geumcheon District, Park continued, “Parents who have some vague suspicions may decide to check on their children’s paternity after hearing those comments.”

Park may be expecting an even bigger increase in business this year because of the noisy public allegations that Prosecutor-General Chae Dong-wook fathered a child out of wedlock a decade ago. Specific doubts aside, the matter has increased general interest in how exactly paternity DNA tests actually work.

Gossip and scandals about the extramarital affairs of celebrities and politicians are a staple of popular culture across national lines and centuries. Recently in Korea, a former Democratic Party spokeswoman, Cha Young, filed a paternity claim against Cho Hee-jun, then chairman of the Kookmin Ilbo newspaper, earlier this year. The popular Korean novelist Lee Oi-soo also caused a stir in April when he confessed to an extramarital relationship in April and faced allegations that he had failed to support his son financially.

DNA testing, with extreme accuracy, has now become universal, so groundless rumors can be handled quickly. But Park said such gossip is a double-edged sword.

“Just because a famous figure is involved in an extramarital scandal doesn’t mean that our lab gets more commissions,” he said. “Rather, because such things are private matters and something to be kept quiet about, a rise of interest in paternity tests sometimes keeps people from having them done.”

The process involved in confirming paternity is relatively simple. At Crown Gene, a customer can register for a DNA test through a phone call or e-mail. Then, DNA samples of the child and the alleged father, often obtained by simply swabbing the inside of the person’s cheek, are mailed to the company.

If the tests are being conducted in connection with legal or official proceedings, it’s a bit more complicated. The people involved have to go to the company or to a government office or courthouse to have a sample taken by a public official after proving their identity.

Once the lab receives the DNA sample, the sample is sterilized and the DNA extracted from the specimen, both of which are done by a lab technician. Then, automated systems take over, examining specific, well-known strings of DNA to see if the father’s sample matches that of his putative child.

Crown Gene has a 200 million won ($184,537) laser transmission spectroscope that Park says can do that sequencing and matching with an accuracy of 99.99997 percent.

Park said, “The chance of the result being wrong is 1 in 8 billion. Other than in the case of identical twins who share the same DNA, we can distinguish everybody in the world.”

The whole process, from the arrival of the sample at the lab to the printing of the results, takes about five or six hours. Arranging the delivery of the printed documents could take a few days, but the lab will provide the results over the phone to the customer.

The tests cost about 120,000 won per person, or 150,000 won if the results have to be submitted to the courts or other public organizations. So DNA testing of two people to establish paternity should cost about 300,000 won in total.

When the National Forensic Service gets overloaded with DNA testing in criminal cases and other matters, it delegates some of the analyses to private labs that have the skill and facilities to conduct them. In such cases, the private companies are not told about the backgrounds of those tested or for what purpose the DNA samples will be used.

The Ministry of National Defense’s Agency for KIA Recovery and Identification and the Korea Immigration Service also send some of their testing to private companies.

But even with the rising need for DNA testing, including the sizeable market for paternity testing, the total size of the market is not large enough to permit economies of scale in using the expensive equipment and skilled manpower needed. So, many companies branch out into sideline businesses or look overseas for more customers.

A new company, DNA Link, said on Sept. 12 it had developed a new technology for forensics it calls AccuID, which it claimed could determine the identity of unknown persons and human remains better than existing genotyping products.