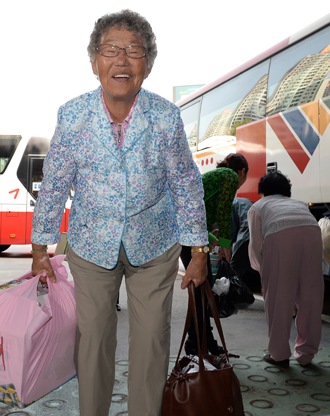 A woman walks out of an express bus terminal in Banpo-dong, Seocho District, Seoul, carrying luggage yesterday. She said she traveled to Seoul from a regional city to spend Chuseok holidays with her grown-up children living in Seoul. [NEWS1]

A survey detailing the pattern of people’s movements during the Chuseok holiday indicates that more people are spending more time near where they live rather than heading for far-flung towns. The survey by the Expressway and Transportation Research Institute showed that the number of residents who live in the Seoul metropolitan area but didn’t leave the region during the holiday increased 19 percent from 1998 to last year.

The metropolitan region encompasses Incheon and Gyeonggi and boasts the largest population in the country.

The institute tracked the movement of about 3.8 million cars that passed through 318 toll gates nationwide based on data from the electric toll collecting system since 1998. The system provides digitized information of the cars’ destination, speed and traveling time. In order to generate more accurate results, the institute referred to demographic statistics detailing drivers’ residences and hometowns.

The traffic research center said that the tendency is the result of an increase in the number of people who live in their hometowns. The institute noted that those people are less likely to visit relatives living faraway or their parents’ hometown in a rural area.

The number of people in their 30s and 40s who were born and live in Seoul and its adjacent regions accounted for 39 percent, or 2.6 million, of the entire provincial population in 1990, but that number increased to 46 percent, or 5.2 million, in 2010.

“I used to go down to Andong, South Gyeongsang, to visit my grandparents for the holiday but after my parents passed away, I didn’t go there,” said a Seoul resident surnamed Kim.

On the other hand, the number of people who travel from other regions to the Seoul metropolitan area jumped to 19 percent in 2011 from 10 percent in 2008.

“This is because more and more relatives and parents come to Seoul to see their sons and daughters,” said Jung So-young, a researcher of the state-run research body. “So, people who used to leave for the remote area don’t need to travel.” 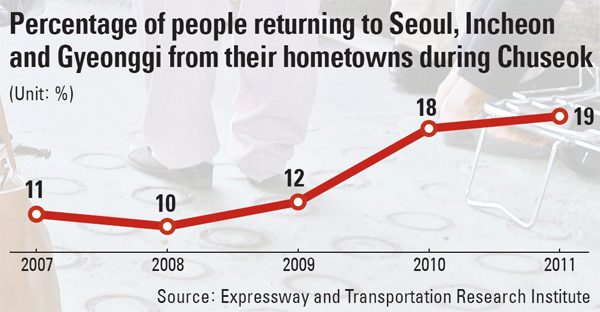 The number of South Gyeongsang people who traveled within the province jumped 30 percent between 1998 and 2012.

The shift in funeral culture also contributed to the change in movement during the holiday. The number of people who lay their deceased’s ashes at a cinerarium constantly increased. Back in 1998, only 24,515 nationwide, including 8,989 in the metropolitan area, used a cinerarium. But, in 2011, some 980,000, including 350,000 in Seoul and the neighboring region, used a cinerarium.

“People mostly choose a cinerarium near where they currently live,” said Namgung Sung, a research head at the institute.

“This makes the driving distance during the holiday get shorter than before. In the future, we may not hear a term ‘Chuseok exodus’ if things keep going like this,” the researcher said.