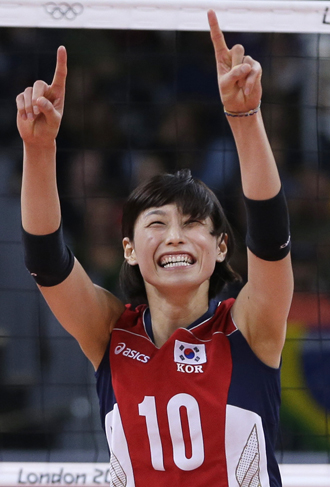 Kim Yeon-koung found back her heroine status in her country - at least for now - as she led Korea to win a bronze medal during the Asian Women’s Volleyball Championship.

The Asian championship presented Kim Yeon-koung in Taegeuk uniform for the first time since the top scorer at the London Olympics withdrew a threat of retiring from the national team.

Kim has been involved in a long-standing dispute over her rights to play in a foreign club, in which her claim to have already acquired a Free Agency has been denied by her domestic club, Heungkuk, and Korea’s governing bodies of volleyball. As the standoff dragged on to the point where she boycotted playing for the national team, some fans criticized her for putting her personal interest ahead of the national honor. Kim called off the boycott in July, saying there was some progress in talks between the parties concerned. The MVP of the 2011-12 European Volleyball Confederation Champions League led the 2013 Asian Women’s Volleyball Championship in scoring with 172 points.

“It’s not a victory on my own, but a victory that every athlete achieved together,” Kim told reporters. “I feel so good that we are able to finish third.”

With a bronze medal, Korea also won a berth to the 2014 FIVB Grand Prix series. Top four teams in the Asian championship are entitled to compete in the Grand Prix.

Korea’s women’s volleyball team is to come back to Korea today and will leave for Qingzhou, China to play the qualifying matches for the 2014 World Championship.