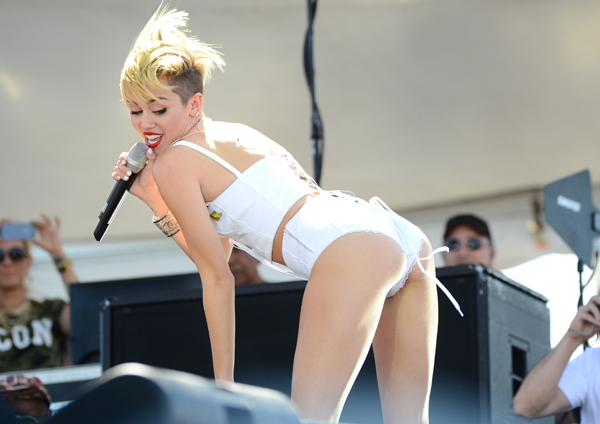 The pop singer was a crowd favorite at the iHeartRadio music festival day event Saturday in Las Vegas. Before she hit the stage, the crowd of a few hundred chanted: “Miley! Miley! Miley!”

The 20-year-old emerged onstage in all white, wearing a tight corset and high wasted shorts that revealed some of her backside.

Her four-song set opened with the anthemic “We Can’t Stop,” where people onstage were dressed in flower, mushroom and rainbow costumes. She gyrated and slapped a dwarf-sized dancer’s butt onstage. She followed the colorful performance with “Party in the USA.”

But it was her emotional rendition of “Wrecking Ball” that was her set’s highlight. Cyrus’ mascara was running as she left the stage after the song and the performance comes days after she announced she was no longer engaged to actor Liam Hemsworth. She thanked the audience for helping the song top the Billboard Hot 100 chart this week.

“I couldn’t have done it without all you guys,” she said.

Cyrus broke a record with the debut of the song’s provocative video, which features her in the nude. It became the fastest music video to reach 100 million views on VEVO.

The wild child singer said she knows “things I’m doing that’s getting me into trouble, and it’s just me doing what my heart and soul is telling me what to do.”

Everything she’s done is “inspired by the music,” she said.

Cyrus, who will release her new album “Bangerz” next month, also sang a new song called “Look at What They’ve Done to My Song.” The guitar tune featured lyrics like “They think I’m half insane” and “I wish I could find a book to live in.”

Cyrus has been added as one of the main performers for the second night at iHeartRadio’s festival at the MGM Grand Arena, joining a list that includes Justin Timberlake, Bruno Mars, Paul McCartney and Drake. Elton John, Katy Perry and Chris Brown performed Friday.