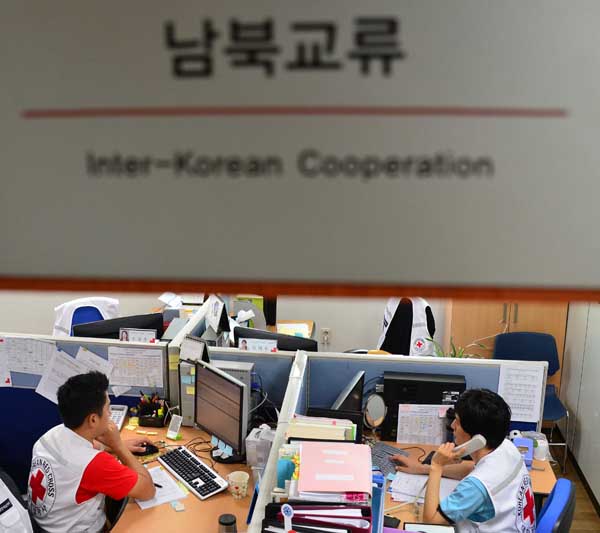 Some 200 families separated by the 1950-53 Korean War were disappointed Saturday when North Korea called off reunions scheduled for this week.

Analysts were divided as to whether the North was taking a stance against the Park Geun-hye government, or using the reunions as a bargaining chip in negotiations on other issues such as the resumption of Mount Kumgang tours and six-party denuclearization talks in Beijing.

The much-anticipated reunions of near 200 war-torn family members, with many family members over 80 years of age, were scheduled to begin Wednesday and last for six days. They would have been the first such reunions since 2010.

On Saturday, during the middle of the Chuseok holiday, the Korean equivalent of Thanksgiving, the North’s Committee for the Peaceful Reunification of Korea said that the reunions and working-level talks to resume tours to Mount Kumgang would be postponed.

The committee added that the reunions would be delayed until “a normal mood is created to proceed with talks and negotiations.”

The North referred to a “confrontation racket” by South Korean conservatives and specifically cited the arrest of the opposition Unified Progressive Party Representative Lee Seok-ki, who is accused of planning an insurrection in South Korea on behalf of North Korea.

The committee statement called that case a “witch hunt” through which the South Korean government was trying “to suppress those who support reconciliation, unity and unification of the North and South.”

The South’s Unification Ministry expressed “deep regret” at the decision and said that the postponement of reunions was “an act against humanity” that has “broken the hearts” of the aged family members.

“Breaking an agreement that came after much effort is an act that drives the atmosphere of dialogue, which took a long time, back into one of confrontation,” said Unification Ministry spokesman Kim Eui-do, “and there is nothing that North Korea can gain from such acts.”

The ministry said that over 70 people involved in preparations for the reunions to be held at the Mount Kumgang resort returned to the South yesterday afternoon.

The cancellation came after the inter-Korean Kaesong Industrial Complex reopened on Sept. 16, five months after North Korea unilaterally withdrew its workers in April. But negotiations to resume tours to Mount Kumgang, stopped since a South Korean civilian was shot dead there in 2008, haven’t resumed.

“The fact that the committee in its statement did not make any mention of the Kaesong Industrial Complex,” said Ahn Chan-il, director of the World North Korea Research Center, “indicates that it will focus on the resumption of Mount Kumgang tourism from now on.”

Both ruling and opposition parties, as well as civilian organizations in the South, condemned the North’s move.

“North Korea cooperates on issues that are beneficial to them like the Kaesong park,” said Min Hyun-joo, a ruling Saenuri Party spokeswoman. “But in regards to humanitarian issues, it tries to regress into the past.”

Jun Byung-hun, floor leader for the opposition Democratic Party, said yesterday at the National Assembly, “What is the political gain of blocking reunions of elderly family members?”

Jun said that nearly 44 percent of people eligible for the family reunions have passed away and that “there is no time.”