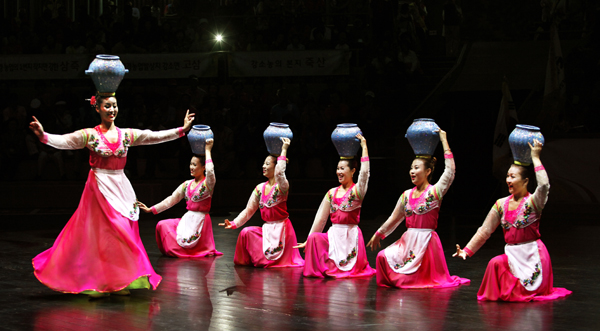 The members of Pyongyang Tongil Art Company performing the “Water Jug Dance,” a North Korean folk dance, at the Namsadang Stage in Anseong, Gyeonggi, on Sept. 14.

The greeting resounded in a thick North Korean accent from a woman at Namsadang Stage in Anseong, Gyeonggi.

“My dear brothers and sisters, it’s really great to see you all here today,” said Bang Bun-ok, who was taking three roles on the stage that day - a singer, dancer and M.C. After Bang’s greetings, the dozens of people who filled the auditorium cheered and clapped, welcoming the Pyongyang Tongil Art Company.

Bang, the head of the troupe, wasn’t acting, though, when she greeted the audience in a North Korean accent. She, like all the members of the art company, is a defector from North Korea. The company was established in June 2007, and now there are nine members and two directors.

The troupe usually puts on dance and singing performances. Their fast-tempo dance routines while decked out in colorful costumes, including hanbok (traditional Korean clothing), amuses the South Korean audience throughout the show. Their best reaction comes from songs influenced by the folk songs of Korea’s northwestern provinces, which inspire the audience to tap their toes and move with the rhythms. They also sing South Korean pop songs and folk songs during the show. 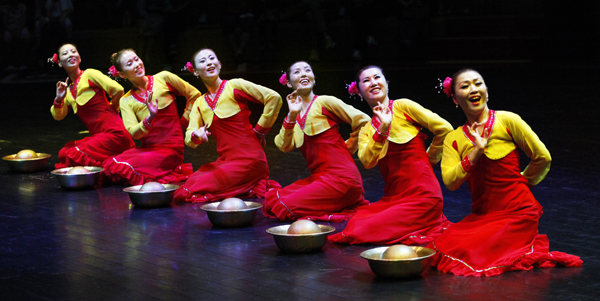 The “Dondollari Dance” is a popular folk dance of Hamgyong Province.

One of their most popular repertoires is the dancing of Jo Eun-hee. Her every dance move is electric, as if she were possessed, and she evokes numerous exclamations from the audience. Jo said she began dancing from the age of 5 and that she is a “real dancer,” having graduated from the Pyongyang University of Music and Dance. Jo said she learned dance from Choi Seung-hee, who was “Asia’s greatest dancer in the 1930s,” and she is happy to work as a “cultural evangelist,” spreading her dance throughout South Korea.

All the members of the Pyongyang Tongil Art Company carry heartbreaking stories. One dancer, identified only as “A,” managed to flee to South Korea and join the company early this year. She said this was her second try. On her first try, she was caught in China and was sent back to the North. In North Korea, she was tortured for trying to defect and lost hearing in one ear. Despite such suffering, A made a second attempt to escape and this time was successful. She said it’s “like a dream, being able to live a dream [dancing on stage] in South Korea happily.”

During the early years of its establishment, Pyongyang Tongil Art Company only had one or two performances a month; however, having earned its reputation around the South, the group now performs about 20 times a month. 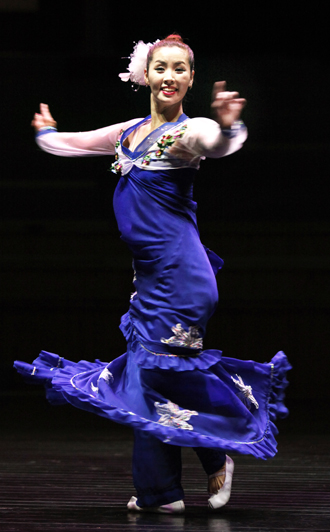 Jo Eun-hee’s dancing is a popular part of the Pyongyang Tongil Art Company.

Recently, the company was recognized by Anseong City and started receiving some financial support, making the troupe more stable. So the Pyongyang Tongil Art Company decided to hold more free performances in public centers for the disabled, elderly and for the socially disadvantaged, saying it was a way to repay South Korea for accepting them.

“I believe North and South Koreans becoming one culturally through music and dance is the shortcut to unification,” said Bang, adding that she would “make endless efforts to become a pioneer of unification.”

The Pyongyang Tongil Art Company holds regular performances at the Namsadang Stage every weekend in Anseong. For information on its performances during weekdays, visit www.ptart.co.kr (Korean only).