Gov’t to bring industry to cities

Gov’t to bring industry to cities 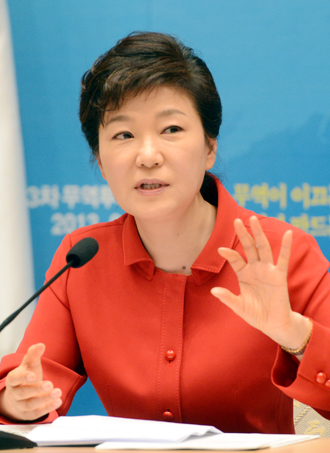 The government will build nine new, cutting-edge industrial complexes near urban areas, including Seoul, in the next two years as part of its efforts to revitalize exports and investment and boost the economy.

According to the plans laid out in a meeting presided over by President Park Geun-hye, the Seoul metropolitan area will add three new technology-centered industrial complexes, including Pangyo Techno Valley. Three new complexes will be established next year and the remaining six the following year.

Candidate areas will be real estate that is soon to be released from greenbelt designated areas, and new towns and manufacturing districts in the centers of cities.

“The competitiveness of industrial complexes directly translates into competitiveness in exports,” said Park at a trade and investment promotion meeting with high-ranking government officials, business lobbying groups and lawmakers.

Goods made in industrial complexes account for 74 percent of Korea’s exports. And yet, young people try to avoid getting jobs in the existing industrial complexes because they’re in rural areas. Innovation, research and development, and links to research institutes and universities are low at those complexes, according to Park.

“Industrial complexes should be transformed into innovative and creative venues so a truly excellent workforce wants to work at them,” she said.

The meeting was the third such trade and investment promotion meeting since the first in May.

Another reason for the investment scheme, according to the Blue House, is that prospects for the domestic economy remain mediocre amid lingering uncertainties over whether the U.S. Federal Reserve will taper off its massive debt purchasing stimulation program.

“R&D and production should go together in this age of convergence,” Park was also quoted as saying by Cho Won-dong, senior secretary to the president for economic affairs, in a press briefing.

The government will step up the export roles of the agriculture and fisheries industries, which are generally thought to be weak.

As of 2012, exports of agricultural and fishery products were $8.01 billion, a meager 1.5 percent of the total exports of $547.9 billion. However, exports to North Asia and ASEAN members have leaped by over 20 percent in the past five years, in large part thanks to the Korean Wave, or the popularity of Korean pop culture.

Japan is a major importer of bell peppers from Korea; China, sugar and coffee products; the United States, pears and seaweed; and ASEAN, strawberries.

The government yesterday set an upbeat export target for agricultural and fishery products of $16 billion by 2017, double the current level.

The Ministry of Agriculture, Food and Rural Affairs singled out the example of bell peppers. Dedicated attention to the markets and systematic operations of farms have propelled bell pepper exports from $500,000 in 1995 to as much as $89 million last year.

Over 40 percent of the vegetable produced domestically is shipped overseas, and Korea-grown peppers make up 64 percent of all those in the Japanese market.

“If we combine agriculture with the top-notch technologies we already have, agriculture and fisheries could develop into a core industry for a creative economy and a new major export industry,” said Park.

The Agriculture Ministry will establish a team to foster “the next bell pepper” that will include businessmen overseas, Korean agricultural and fishery organizations and exporters. Members of the team will visit China in October for market research. The government will later assist with R&D and overseas marketing.