Bracketing Gyeongbok Palace in heart of Seoul are two old neighborhoods - Seochon to the west and Bukchon to the east. Both of the neighborhoods are full of traditional homes, many restored to their full beauty in recent years, along with beautiful old shops and cafes, and several museums.

However, the two neighborhoods also have their differences. Bukchon is often called a “living museum,” where you can look on the history and traditions of olden-days Seoul. Seochon, on the other hand, is considered a place more connected to today, where residents live in the now and go about their daily business.

The JoongAng Ilbo recently took a trip to both Seochon and Bukchon and picked out 10 must-see tourist attractions in each neighborhood. 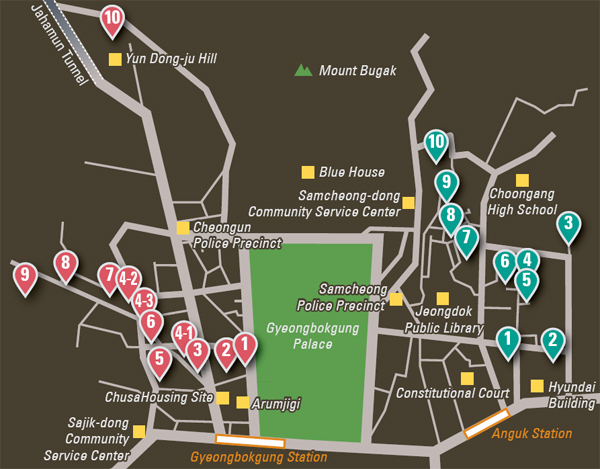 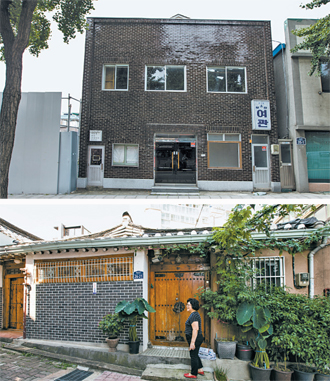 Right next to Gyeongbok Palace, a shabby building welcomes visitors to Seochon. The building is Boan Inn, a hotel where many great poets like Yi Sang and Seo Jeong-ju resided for long stays and where they wrote many of their works. The Inn operated for more than 80 years until it closed its doors in 2006. Today, only the exterior of the building is the same, as the interior was completely renovated in 2009, and now the building is used as a venue for experimental artists. There’s also a flea market scheduled to take place here on Oct. 17.

A few meters from the inn stands a beautiful hanok, or traditional home, the Ryugaheon Gallery. The gallery, which opened in 2010, specializes in photography. There’s a tiny garden inside, filled with rough-hewn wooden benches where you can gaze on the photos on display. There’s also a small cafe where you can sit and look at photo books. Ryugaheon is open each day from 10:30 a.m. to 6:30 p.m., except for Mondays when it is closed.

Seochon also has the house where Yi Sang grew up (presumably before he moved to Boan Inn). That house was demolished after its owner, Yi’s uncle, died, but it was replaced by another hanok that still stands.

The house is currently under renovation and will be reopened as a memorial space for the poet at the end of next month.

The home of the famous female poet Noh Cheon-myeong is also in Seochon, although it is a private home not open to the public.

But you can enjoy the exterior of the old building. Noh was sentenced to 20 years in prison during the 1950-53 Korean War, accused of being in league with the North, but was released from jail after only six months thanks to the efforts of her fellow writers. After leaving prison, she lived in the house with her adopted daughter (she wasn’t married) until she died at the age of 46 in 1957.

There are many more places to look around in Seochon, such as the Daeo Bookstore, which is still in business since opening in 1951. The Yun Dong-ju Cultural Center will be the final spot for many visitors to Seochon, located at the foot of Mount Inwang to the northwest of Gyeongbok Palace.

Yun is a poet who lived in the first-half of the 20th century. He is known to have hiked up Mount Inwang frequently to think. Today, the Yun Dong-ju Cultural Center holds many cultural events. 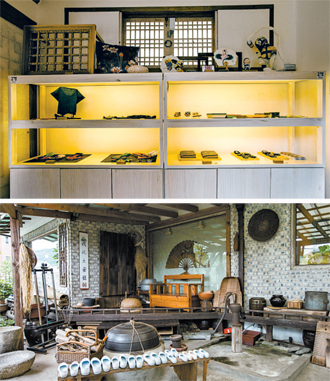 The winding, narrow alleys of Bukchon are considered the “scene of history.” It’s only been 10 years since the entire neighborhood, sandwiched between Gyeongbok and Changdeok palaces, became a “living museum.” Due to the efforts of its residents and Seoul City, abandoned hanok homes were reconstructed and the neighborhood dressed up. However, it remains chiefly a residential area, so it’s important for visitors to be quiet and not peek inside people’s homes, even if they have their doors or windows open.

But if you want a real hanok experience of your own, you can try out a hanok guest house.

Most walks through Bukchon start from the Bukchon Cultural Center near Anguk Station. The cultural center, operated by Seoul City since 2002, offers classes on calligraphy and holds tea ceremonies throughout the year. It is open from 9 a.m. to 6 p.m. on weekdays and until 5 p.m. on weekends. Near the Hyundai Building, the culture center is also the best spot to catch a panoramic view of Changdeok Palace.

Manhaedang is a guesthouse in Bukchon that offers visitors a special hanok stay experience. This is also the site where independence fighter and Buddhist monk Han Yong-un (1879-1944), who had the pen name Manhae, published his famous reformist track “Yusim.”

Next to the Manhaedang guesthouse is the Bukchon Traditional Crafts Workshop, which is filled with small workshops. From embroidery to knots, there are dozens of workshops where visitors can purchase handicrafts and even try many out for just a few thousand won.

If you want to take a really good picture of hanok homes in Bukchon, you have to go to 31 Gahoe-dong, the steep alley lined with the densest collection of hanok in Seoul. Near this observation point, there’s the Bukchon Museum of Old Fragrance. If you are wondering what Bukchon looked like back in the day, before the neighborhood became a tourist attraction, the museum is a good experience as it is full of items that have been discarded by Bukchon during its renovations since 2000 - old dishes and spoons, iron pots and so on. The Bukchon Museum is open year-round from 10 a.m. to 7 p.m. Admission costs 5,000 won ($ 4.65) for adults and 3,000 won for children.

When walking along the Samcheong-dong road, you will come across the Korea Banking Institute. Although it may seem like a mistake to include the Korean Banking Institute building as a must-visit spot, it’s actually not. The site used to be the location of Bunsachang, where weapons were produced and stored during the late Joseon Dynasty. Later, under Japanese colonization, Bunsachang became a laboratory for medical experiments, then the National Quarantine Laboratory after the liberation. In the 1970s the Bank of Korea purchased the site and established the banking institute that’s there today.