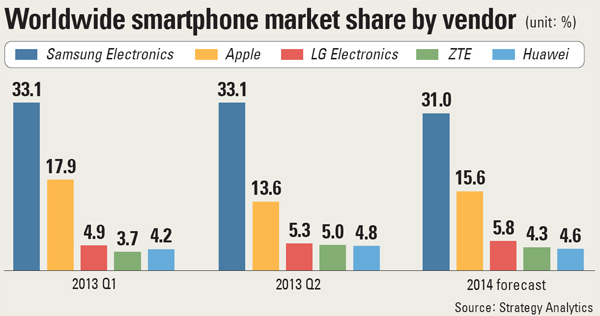 LG Electronics is bidding to continue its global momentum with its new phablet, Vu3, which went on sale in Korea yesterday. Analysts, though, are split on whether LG can challenge Samsung Electronics and Apple.

LG jumped to the No. 3 position in the global smartphone market this year. It had a 4.9 percent share in the first quarter and a 5.3 percent in the second quarter, according to a July report by Strategy Analytics.

On Thursday, the U.S.-based market researcher drew a rosier picture for LG, predicting the Korean company will continue to improve its position next year to a 5.8 percent market share. 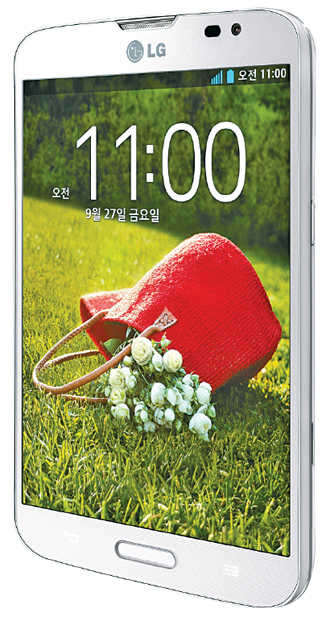 But the company credits its growth in part to its focus UX (user experience) design. The 5.2-inch Vu3 keeps the 4:3 aspect ratio display of the previous Vu models, including the Optimus Vu1.

“We are not a follower,” said an official of LG Electronics. “We have been making products that we thought could meet the needs of customers, and some other companies turned out to have made similar products.

“We have seen our unique 4:3 display models have a wide appeal and will continuously try to satisfy customers.”

The company is also competing with Samsung to be the first in the world to release a curved display smartphone, which some market observers say could become a trendsetter in a more innovative smartphone market.

“We are working to unveil the products within the year,” the official said.

LG expects that it will keep its third-place position when third-quarter results are released, probably next month.

Yesterday, Lee Seung-woo, an analyst at IBK Investment and Securities, lowered the firm’s target for the share price of LG Electronics from 100,000 won to 92,000 won, citing marketing costs.

“LG Electronics’ smartphone business is certainly improving. But the pace is somewhat slower than expected, and it is likely its marketing cost will weigh on its business until profitability rises to a certain level,” Lee said.