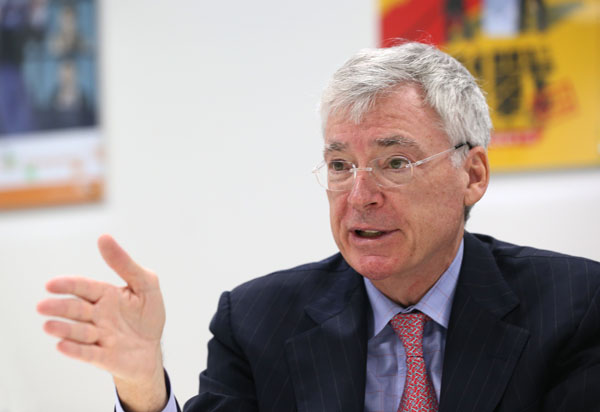 There aren’t many chairmen and CEOs of global businesses that don’t own a car and take the subway to work. Nor are there many people who run sports, fashion and media empires after earning a PhD at Cornell University for a dissertation on 12th century neo-Platonism. But that’s Michael J. Dolan, chairman and CEO of IMG, the global sports and media group.

Founded in 1960 by Mark McCormack, who pretty much invented the concept of the sports agent by signing the golf legend Arnold Palmer, IMG has expanded its horizon to become a leader in sports, media and fashion. The company runs more than 60 offices in 30 countries and has expanded beyond sports management to operating major sporting events.

Having been anointed IMG’s third chairman and CEO in 2011 following Ted Forstmann, Dolan has been globetrotting as he pushes the internationalization of his company, which is what brought him to Seoul - by private jet, no less - on the 22nd. During his tight three-day schedule, Dolan visited the JoongAng Ilbo and the TV channel JTBC, whose golf channel, J Golf, has a successful partnership with IMG for broadcasting the LPGA in Korea.

Dolan began his colorful career path teaching at the City University of New York, before getting an MBA at Columbia University and turning his energies to business. Since then, he’s developed a long and successful resume, before joining IMG in 2010. Asked about the changing course of his life, his answer was simple: “Relationships with mentors led me to where I am.”

His latest mission to increase IMG’s internationalization is a recognition of how the world is changing. “Asia is a growth market for us,” he noted. “This is where the fish are for us now.”

“No one in today‘s world can know everything, so it’s important for us to find strong, knowledgeable partners who know the local markets,” Dolan said. “We aim our partnerships to be 50-50.” In doing so, IMG has started several partnerships in Asia, including at China’s CCTV (his travels took him to China right after Korea, on Sept. 24).

Korea is an “interesting” market for IMG, Dolan said, as it has “both sides of developed and developing countries,” along with the great potential that comes from hosting the 2018 PyeongChang Winter Olympics. As the chairman of IMG, Dolan’s interests extend to Korea’s pop culture industry as well. “From the dance moves to make-up to fashion, there’s a whole system that makes K-pop universal,” he noted. And his interests also touch arthouse films, with Dolan specifically mentioning “3-Iron” by Kim Ki-duk.

Although he modestly says things like, “My dissertation is a great cure for insomnia,” Dolan certainly knows what he is doing.

As a leader, he emphasizes the importance of containing your emotions. “You should not get too happy when things go well, and when things are not going well, there‘s no reason to get too depressed,” he said.

Dolan says he is not sure when he will visit Seoul again, but if he does, there’s a destination that he says he’ll be sure to visit: Seoul‘s subway stations.

As someone who walks through Central Park most days on the way to the subway, Dolan said he would like to try out the Korean subway system, with a take-out green tea in hand.