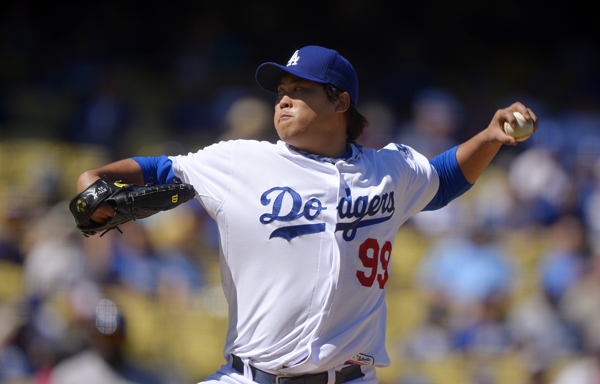 Los Angeles Dodgers starting pitcher Ryu Hyun-Jin throws against the Colorado Rockies during the first inning of Sunday’s game in Los Angeles. The Dodgers finished the year 90-72 and will face the Atlanta Braves in the postseason. [AP/NEWSIS]

Ryu Hyun-jin of the LA Dodgers wrapped up his impressive first Major League Baseball season with 14 wins and eight losses, following a 2-1 loss to the Colorado Rockies on Sunday. The Dodgers ended the regular season 92-70, and will battle the Atlanta Braves in the National League Division Series.

Ryu went only four innings in his last appearance of the regular season, giving up eight hits and two runs, one in the first and another in the fourth, while walking one and striking out four. Ryu threw only 76 pitches, but Dodger manager Don Mattingly replaced Ryu with Ricky Nolasco in the fifth inning as he wanted give Ryu more rest before the playoffs.

“The pitch count was already set before I went out on the mound today. I’m just really unhappy that my pitch count was so high early that I couldn’t go past four innings,” Ryu said, according to MLB.com.

The first inning was typical Ryu. The Rockies scored one run in that inning after Ryu walked leadoff hitter Charlie Blackmon and then gave up three consecutive hits. But Ryu got out of that jam by striking out two and retired the last batter on a grounder. His first inning average ERA was 5.10. 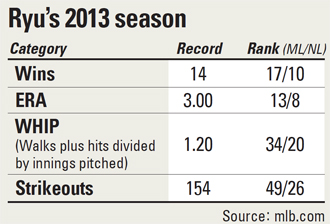 In the fourth, he allowed three singles and a sacrifice bunt, but only gave up one more run.

Despite the lost, Ryu finished his debut season with some impressive numbers. With a record of 14-8 and a 3.00 ERA, he contributed to the team advancing to the postseason. Before the season started, Ryu said his main goal for the year was to keep his ERA under 3.00. He could have pitched one more inning without allowing a run against the Rockies, but manager Mattingly wanted to save Ryu for the playoffs.

Ryu made a rough MLB debut against the team’s biggest rival, the San Francisco Giants, in April, giving up 10 hits and one run in six-and-a-third innings. But he soon adapted to the major leagues and finished April at 3-1 and a 3.35 ERA in six games. He followed that with an outstanding May, going with 3-1 and getting a 2.38 ERA. He didn’t earn any wins in five games in June, but his ERA was 2.70.

His best performance of the season came in May when he shut out the Los Angeles Angels while only giving up two hits and no walks.

He also made 22 quality starts over the season, breaking the Dodgers’ rookie record held by Hall of Fame pitcher Don Sutton, who had 21 in 1966.

Ryu’s average fastball speed this season was 92 mph, but was able to produce 154 strikeouts.

“It is because he can locate pitches in the right spots and his change-up is one of the best in the league,” said Han Yong-deok, a former pitching coach of Ryu. “Many people talking about speed, but his fastball has good movement.”

According to a survey conducted by Baseball America of managers in the big leagues, Ryu’s changeup was selected second-most difficult to hit, following Cole Hamels’ of the Philadelphia Phillies.

“Hitters in the big leagues are more aggressive than hitters in Korea and Japan, especially when runners are on base,” said Kim In-shik, former manager of Ryu at the Hanwha Eagles. “And his changeup has been effective in producing ground balls.”

“Ryu needs to improve his slider and curve ball because most teams in the leagues already know that he is a changeup pitcher,” said Heo Koo-yeon, a baseball analyst. “He also needs to get better in first innings and away games.”