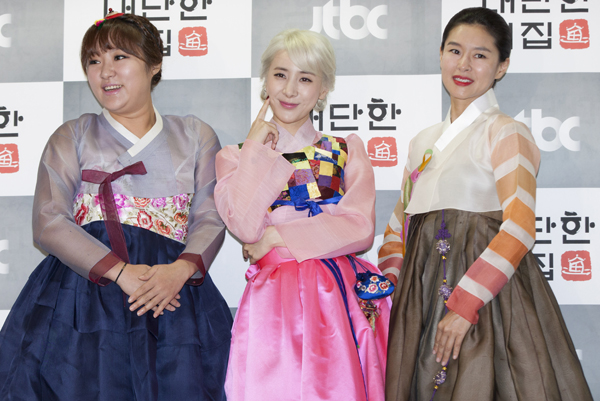 Three bachelorettes struggling with some old-school in-laws from imaginary marriages. That’s the theme of “The Great In-Laws,” a new reality program on cable channel JTBC.

Singer Seo In-young, actress Ye Ji-won and comedian Kim Hyun-suk were sent to the countryside to live with pretend in-laws, in an attempt to simulate the trials of married life.

The three women shared their thoughts on the show and the hardships they experienced during filming.

Q. How do you feel the program went?

A.Kim Hyun-suk: I went to Bigeum Island in South Jeolla, and as soon as I arrived I was asked to shovel. But I did my best and then my “father-in-law” welcomed me.

Seo In-young: I went to a pepper farm in Yeongyang, North Gyeongsang. I was scolded many times for oversleeping. I had conflicts with my elders and sisters-in-law in the beginning, maybe because I voiced my opinions. They were very nice, but it was still uncomfortable. Many of the local neighbors thought I was a foreigner due to my yellow hair.”

Ye Ji-won: I was put into a car without knowing where I was going. I could understand what young women in ancient times must have gone through.

Why did you take part in this program?

Kim: I wanted to get rid of the image I have as an old maid. Many people think that I cling to men and drink every day.

Seo: I have participated in so many reality programs. I have studied at the Korea Advanced Institute of Science and Technology, and I have been put into a marriage. And now here I am, experiencing life with in-laws. Even though I show an unpleasant side of me, I also wanted to show how I can overcome hardships instead of trying to control my image.

Has this program changed your thoughts on marriage?

Seo: I don’t think that I want to get married early. But I want to meet a husband who can smooth things with my in-laws.


What was the most difficult thing you experienced?

Seo: Getting the chores done was easy, but it was hard to build a relationship with people. I normally don’t really care about what others think, but this time I was constantly thinking about what others would think of me. I ended up so stressed I couldn’t digest properly.

Ye: One time, I went out to wash some blankets and I forgot to turn off the oven as I was steaming sweet potatoes. Homemaking is not easy.

In what category did you think you did the best?

Kim: I’m very good at cooking and I even gave recipes to my mother-in-law. Also, I signed my family up for cable TV so my father-in-law could watch me.

Ye: Although I still lack in washing dishes and doing laundry, I have physical strength and endurance.