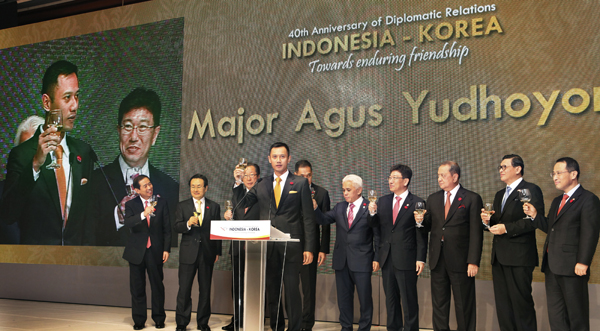 Ahead of President Park Geun-hye’s first Indonesia trip slated for next week, hundreds of government officials, diplomats and businessmen from Indonesia and Korea attended a gala in celebration of the 40th anniversary of diplomatic relations between the two countries.

The Indonesian Embassy hosted the event on Sept. 25 at the Lotte Hotel in Sogong-dong, central Seoul.

Maj. Agus Yudhoyono, son of Indonesian President Susilo Bambang Yudhoyono, attended the event on behalf of his father and pointed out the deep connection between his family and Korea, as his late grandfather was appointed the first Indonesian ambassador to Korea. “He lay the foundations” of bilateral relations between the two countries, said Yudhoyono.

“My father, the president of Indonesia, remembers and appreciates how in the wake of the 1997 and 1998 Asian financial crisis, Korea first chose to stay in Indonesia and help our economy recover,” Yudhoyono added.

“Indonesia also remembers and appreciates how in 2004, in the aftermath of Indonesia’s first democratic election, Korea was one of the first countries to call and congratulate [my father] and pledge support to affirmative growth and alleviate difficult reforms.”

After meeting with the Indonesian business delegation, Park said she looks forward to progress in ongoing free trade talks with Indonesia and a boost in bilateral trade volume.

Indonesia, comprised of thousands of islands, has the world’s 16th-largest economy.

Diplomatic relations between the two countries were established in 1973.

Minister of Trade Yoon Sang-jick said, “Since the establishment of diplomatic relations in 1973, Korea and Indonesia have built a special friendship.”

“In the area of trade, we have experience a 160-fold increase in trade volume, which amounted to $29.6 billion last year,” he said, adding that Korea is Indonesia’s third-largest destination for foreign investment.

The night featured a series of musical performances, including one from Korean pop singer Eru and his father, veteran singer Tae Jina, Indonesian actress Atiqah Hasiholan and a group of musicians playing angklung, an Indonesian instrument made out of bamboo tubes. Guests were also given the opportunity to learn the angklung and play along. Fashion designer Alleira Batik also showcased Indonesian haute couture in a fashion show.

‘Guanxi’ and the black society (KOR)