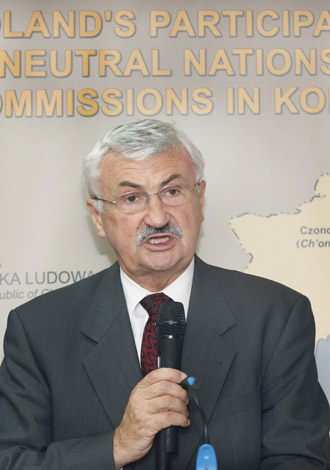 The Embassy of the Republic of Poland yesterday convened a special seminar to emphasize the role of the Neutral Nations Supervisory Commission, in commemoration of the 60th anniversary of Korea’s armistice agreement.

“No doubt that since 1953 the role of the NNSC has been greatly reduced,” said Krzysztof Ignacy Majka, Polish ambassador to Korea, in a speech before the seminar.

“However, it is still an important and legal instrument contributing to the avoidance of hostilities on the Korean Peninsula.

“As long as the armistice agreement is not superceded by a peace treaty, the role of the NNSC remains important, in maintaining the stability and promoting confidence on the both sides of the demarcation line.”

The Military Armistice Commission established the NNSC to monitor tensions on the Korean Peninsula after the 1950-53 Korean War ended in a cease-fire.

Four neutral nations - Switzerland, Sweden, Poland and Czechoslovakia - were appointed to supervise the military confrontation between two Koreas, which are still technically at war.

North Korea expelled the Czech and Polish staff at the NNSC from its territory in 1993 and 1995 respectively, raising distrust about the commission’s role in monitoring the reinforcement of U.S. forces in the South.

“Today, only the Swedish and Swiss delegations remain in the Demilitarized Zone,” the ambassador said.

“The Polish delegation ... whenever it is required, come to Panmunjom to participate in NNSC activities and support its Swiss and Swedish colleagues.”

Maj. Gen. Urs Gerber, a Swiss member of the NNSC, stressed the legitimacy of the commission’s presence at the seminar.

“I have to remind you that the armistice agreement is the legal basis for the existence and the activity of the NNSC,” the general said. “As long as it is in force, we are here and we are doing our job.”

The Swiss general refuted North Korea’s nullification of the armistice agreement in March, saying there was no legal basis for the regime to do that.

“North Korea considers the armistice agreement as a nullified agreement,” he said.

Although the size of the NNSC has shrunk, the presence of the commission still has a significant meaning on the divided peninsula, said Cho Sung-hun, a senior researcher at the Institute for Military History Compilation.

“Today, their presence stands as a symbol for the armistice agreement,” Cho said.

“Beyond the symbolic effect, the NNSC should pursue ways to undertake new missions, such as mediating roles or as an organization of Neutral Nations Supervisory forces resembling UN peacekeeping forces.”