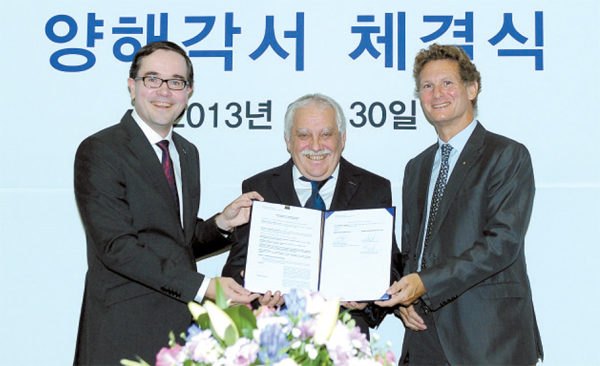 BUSAN - Renault Samsung Motors yesterday signed a memorandum of understanding (MOU) with Renault and Nissan at its Busan plant for production of the next-generation Nissan Rogue scheduled to be rolled out the middle of next year.

Signing the agreement was Nissan Chief Performance Officer Colin Dodge, who also serves as executive vice president of North America; Gilles Normand, chairman of Renault’s Asia-Pacific region; and Francois Provost, the CEO of RSM, who referred to the MOU as a “game changing” moment for the automaker.

“This is a win-win-win project between RSM and Renault and Nissan,” said Provost. “It is a big step in our plan for revival.”

The business deal to produce 80,000 units of the Rogue for export to North America was announced in July 2012 when Renault-Nissan Alliance chief Carlos Ghosn visited Korea. The Brazilian-born CEO said at time the alliance would invest $160 million and that the deal demonstrates “the flexibility and power of the Alliance for all partners.”

Provost said the “project is becoming reality” as employees were busy working to set up the production line in the Busan plant even during the Chuseok holidays.

RSM, the Korean unit of French automaker Renault, has seen slumping sales in recent years with production at the Busan plant down to 60 percent compared to 2010 when it rolled out 270,000 vehicles.

The company, which is Korea’s smallest automaker, hopes production of the Nissan Rogue will be a boost for its Busan plant, which will not only help its employees but also suppliers, as RSM also plans to make its next-generation QM5 SUV using the new Rogue platform.

“There will be a 600 billion won [$559.5 million] economic impact for local suppliers,” said Provost. “This is a concrete result for all of us who tried our best effort forward for the revival plan.”

Dodge, who will be in charge of selling the RSM-made Rogue in North America, said that Nissan will rely on RSM.

“Employees and suppliers seem to be very diligent, and I believe the new Rogue will meet U.S. customers’ expectations,” he said.

According to Dodge, RSM’s Busan plant will be the first among Renault’s affiliates to ship directly to the United States, adding that the company has no plans to sell the Rogue in Korea or other regions.

“We will produce this car in Smyrna [Tennessee], Kyushu [Japan] and here,” Dodge said. “And I’m hoping you’re the best.”

“The U.S. is an enormous market in this segment and we ask Busan to meet the demand,” he said. “I don’t think you have to worry about sales, because I promise we will sell it.”

Renault sees this as an opportunity for RSM to expand its presence within the group and advance its plan to be an export hub in Asia. “Car sales in the Asia-Pacific region are about 50 percent of the global market, but only 10 percent of Renault’s revenue,” said Normand. “RSM is in the center of our plan to double the share by 2018.”

However, at the same time, Normand emphasized that RSM’s first goal should be to do well in the domestic market. For the first eight months of this year, the company sold 36,493 vehicles in Korea, down 8 percent from a year ago.

RSM has been trying to bounce back by releasing the SM5 TCE and recruiting former Volkswagen Korea Managing Director Park Dong-hoon, who is in charge of sales.

The company especially hopes to gain momentum when the QM3 goes on sale at the end of this year. The small crossover utility vehicle, also known as the Renault Captur, will be imported from Europe, and the automaker will decide later whether it will produce the vehicle in Busan.