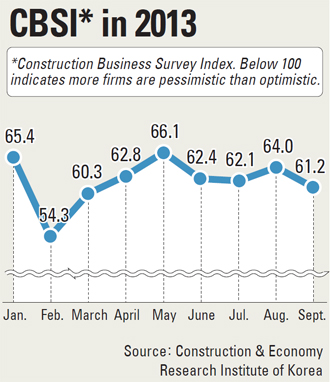 Despite the government’s additional plans to boost the nation’s real estate market, Korean builders remain concerned as the construction business survey index (CBSI) in September fell to its lowest point in six months.

According to data from the Construction and Economy Research Institute of Korea (Cerik) yesterday, the CBSI last month was 61.2, 2.8 points lower than in August and the lowest since 60.3 points in March.

A CBSI index below 100 indicates more companies are pessimistic than optimistic regarding the current construction market.?

The CBSI increased 11.8 points from March to May after the government announced real estate stimulus measures on April 1.

However, it went down in June and July after approval of the government plan was delayed in the National Assembly. The end of the temporary acquisition tax cuts also took a toll on sentiment.

The large company index for last month went down 7.2 points to 85.7. However, the midsize builders’ index increased 1.9 points to 50, ending the four months of decline. Small builders registered 45.3, down 2.8 points from the previous month.

By region, builders in Seoul posted a 2.2 point month-on-month increase to 73.1, as the index for builders in the metropolitan areas plunged 14 points to 39.3 points.

Meanwhile, the CBSI forecast for this month increased 8.5 points to 69.7, according to Cerik.

“This month, legislation of the government’s real estate measures and other related plans will decide the increase of the index,” said Lee Hong-il, a researcher at Cerik.

According to the survey of 532 builders from April 8 to 19 by Cerik, more than 65 percent said their financial condition worsened in the first quarter of the year.

In addition, more than 70 percent of builders answered that next year’s situation will be worse than this year, while only 7.6 percent expect the market to improve.

“The financial structure of the construction industry, which relies on internal reserves and current liabilities, is very weak in business cycle changes,” said Bin Jae-ick, a researcher at Cerik. “There should be measures for builders to get more operating funds from construction financial institutions.”