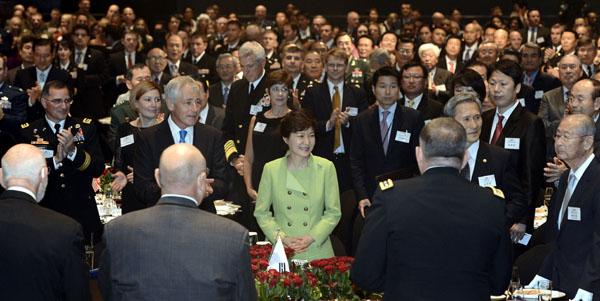 President Park Geun-hye, center, and U.S. Secretary of Defense Chuck Hagel celebrate the eve of the 60th anniversary of the Korea-U.S. alliance at an event at the Grand Hyatt Hotel in Yongsan District, central Seoul, yesterday. [NEWSIS]

Today marks the 60th anniversary of the Korea-U.S. alliance, and Seoul is holding a series of commemorative events, including a celebration yesterday attended by Korean War veterans, U.S. military personnel and government officials.

Some 500 guests attended the “Alliance Night” event yesterday evening at the Grand Hyatt Hotel in Yongsan District, central Seoul, including President Park Geun-hye and U.S. Secretary of Defense Chuck Hagel. It is Hagel’s first visit to Korea since taking his position in February.

The security alliance dates back to the Mutual Defense Treaty of Oct. 1, 1953, signed in Washington following the 1950-53 Korean War.

Some 36,000 U.S. troops lost their lives in the Korean War, according to the Korean Ministry of National Defense.

As part of the event, the first Paik Sun-yup Korea-U.S. Alliance Award, named after the nation’s first four-star general, was presented posthumously to Gen. Walton Walker (1889-1950), a former commander of the Eighth U.S. Army during the Korean War. His grandson, retired Col. Walton Walker II, will received the award and $30,000 on his grandfather’s behalf.

To celebrate the 60th anniversary, Seoul also held a marathon race, a photo exhibit in Gwanghwamun and an academic seminar. The seminar was held yesterday at the Hyatt Hotel and defense experts evaluated the 60 years of the Korea-U.S. alliance and plans for its future.

Hagel, as a part of an unusually long four-day visit that kicked off on Sunday, earlier yesterday visited the Demilitarized Zone (DMZ) and the border peace village of Panmunjom, accompanied by Defense Minister Kim Kwan-jin. Hagel also spoke to American and Korean service members.

“There’s no margin of error up here,” Hagel told reporters there yesterday, calling the Joint Security Area an “important location that we need to pay attention to.”

He also said that the Pentagon does not have any plans to reduce the size of U.S. troops in Korea despite overall budget cuts.

Military officials led by Korea’s Chairman of the Joint Chiefs of Staff Jung Seung-jo and his U.S. counterpart Gen. Martin Dempsey also held the 38th Military Committee Meeting yesterday in preparation of a Wednesday meeting with the theme “60 Years of Shared Partnership and Prosperity.”

Today, Hagel is expected to attend an official ceremony marking Korea’s Armed Forces Day, the first time for a U.S. Secretary of Defense.

A bilateral summit is slated for tomorrow to assess the North Korean threat and alliance issues with Seoul. This would be the annual 45th Security Consultative Meeting between Hagel and Defense Minister Kim Kwan-jin, who are both expected to discuss among other issues a delay in the transfer of wartime operational control (Opcon) of troops from the United States to Korea. They are expected to adopt a joint agreement.

Korea handed over its wartime command of troops to the United States during the Korean War and regained peacetime operational control in 1994.

Seoul initially was scheduled to retrieve its operational control in time of war in April 2012, but the date was pushed back to December 2015.