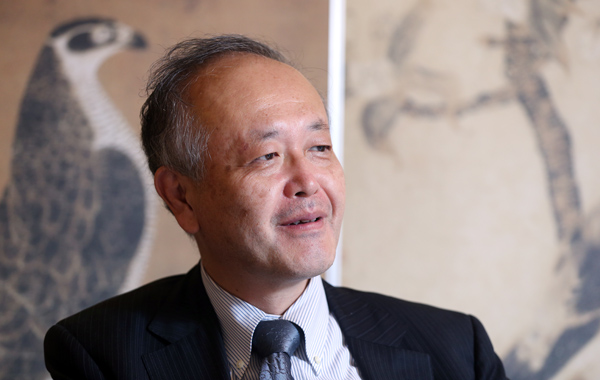 Okamoto Atsushi, the CEO of 100-year-old publishing house Iwanami Shoten, called on publishers to help improve ties between Korea and Japan while speaking in Paju, Gyeonggi. By Kim Sang-seon

Regardless of the field, no business can ignore the imperative to sell its products. It is the same for publishers, too. But if they were only worried about books that sell, no one ever would have published the complete 20-volume works of Aristotle or the “World Dictionary of Biography,” which required some 800 writers.

Iwanami Shoten, the Japanese publisher, has lasted for precisely 100 years. In that time, it has maintained its sense of duty, even in the face of the miserable condition of the global publishing market. The publisher is famous for “Kojien,” a comprehensive one-volume dictionary of the Japanese language that has long been considered the standard.

“We know that these are not the books that will sell in great quantities,” said Atsushi Okamoto, the CEO of Iwanami, to the Korean reporters recently at the Paju Book City Forum 2013, held in Paju, just northwest of Seoul. “But someone has to do it to harden the intellectual basis of society and grow cultural power.”

Okamoto acknowledged the troubles facing the publishing industry around the world but still he sees hope. “As long as a man lives in a society and makes efforts to solve problems, books are a must,” he said. “The important contents of humanity will still remain on paper, even with the advancements in digital.”

Iwanami Shoten launched its publishing business with the novel “Kokoro” (Heart) by Soseki Natsume, a year after its foundation as an old bookstore in 1913 in Jimbocho, Tokyo.

In 1927, Iwanami introduced Iwanami Bunko (or Iwanami Library of Classics), providing classic works for cheaper prices. Then the series Iwanami Shinsho (Iwanami Paperbacks) was founded in 1938, focusing on news and current events; it published books opposing fascism and the invasion of China. It also published the progressive monthly “Sekai” (The World), providing a rare voice against the colonization of Korea.

Atsushi was an editor at “Sekai” for the last 16 years before taking the CEO position last June.

“Currently the Japanese are going through a big crisis involving a power plant accident that is being called the ‘Chernobyl disaster in the ocean,’” he said. “In a situation like this, the questions of justice and your way of life are called upon. It would be pointless for a publisher to survive without providing something for the people.”