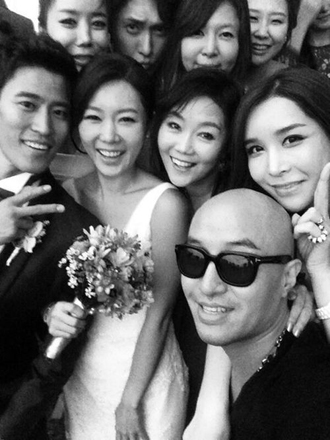 While Korea’s top celebrities were walking down the red carpet at the Busan International Film Festival, entertainer Ahn Sun-young, 36, walked down the aisle.

Ahn’s agency announced in September that the entertainer had set a date and would hold a “quiet wedding march” by holding a closed ceremony with close friends and families and without a press conference. However, many of Ahn’s close friends uploaded pictures on their personal SNS accounts of Ahn’s wedding, which was held outdoors. The pictures showed Ahn’s husband, who is three years younger than her. The husband, Seo Jeong-kwan, is known to be a head of a food and beverage business based in Busan.

Ahn posted a message on Twitter yesterday thanking all the guests “who have come so far despite busy schedules to congratulate me on my wedding day.” Guests such as entertainer Park Soo-hong, Hong Seok-cheon, Ha Ri-su and Kim Na-young and many more participated the ceremony. Ahn’s marital home will be in Busan, although the entertainer will be traveling often to Seoul to continue with her career.