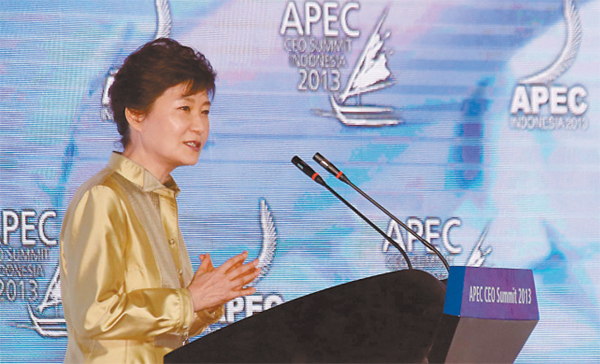 President Park Geun-hye yesterday arrived in Bali, kicking off a two-nation Southeast Asia trip to Indonesia and Brunei that concentrates on boosting economic cooperation with an emphasis on promoting a creative economy.

Park made a keynote speech at a meeting of CEOs at the Asia-Pacific Economic Cooperation (APEC) summit yesterday, which focused on the benefits of a creative economy and how it is necessary for Korea and beneficial to all of the countries represented in Bali.

Referring to the 2008 financial crisis, Park said, “The root of the global economic recession was an innovation crisis” and emphasized that “the only way to achieve global sustainable growth is through innovation.”

She emphasized the concept of the “three news” - new ideas, new technology and new industries. She said the Korean government is open to free trade agreements with countries across the world and is a promising country to do business with and invest in. The title of her speech was “The Business of Innovation: Why Does it Matter?”

Initiated in 1996, the three-day APEC CEO Summit at Bali’s Nusa Dua area was attended by more than 1,000 business leaders and 10 heads of APEC member states with the theme “Towards Resilience and Growth: Reshaping Priorities for the Global Economy.”

Topics expected to be discussed at the summit include sustainable growth, promoting inter-connectivity in the region and a timeline for free and open trade and investment in the Asia-Pacific region.

Blue House officials said Korea has been looking into the possibility of taking part in the Trans-Pacific Partnership (TPP), the regional Asia-Pacific free trade negotiations, an issue that may be raised during the APEC summit.

Park’s eight-day trip, her fourth trip abroad since becoming president, also takes her to Brunei on Wednesday for events held around a meeting of the Association of Southeast Asian Nations (Asean). She then heads back to Indonesia, but to the capital of Jakarta, for a three-day state visit on Thursday. The two countries celebrate 40 years of diplomatic relations this year, and Park will meet with Indonesian President Susilo Bambang Yudhoyono on Saturday.

Park’s debut in multilateral diplomacy took place last month in St. Petersburg at a Group of 20 meeting. It continues with her visit to the APEC meeting and two meetings held in conjunction with the Asean summit.

In Brunei, Park will attend an Asean+3 meeting - among the Asean members and their three main Northeast Asian partners, Japan, China and Korea - and a meeting of the East Asia Summit.

However, it does not seem likely that Park will hold a separate bilateral summit with Prime Minister Shinzo Abe on the sidelines of any of the meetings.