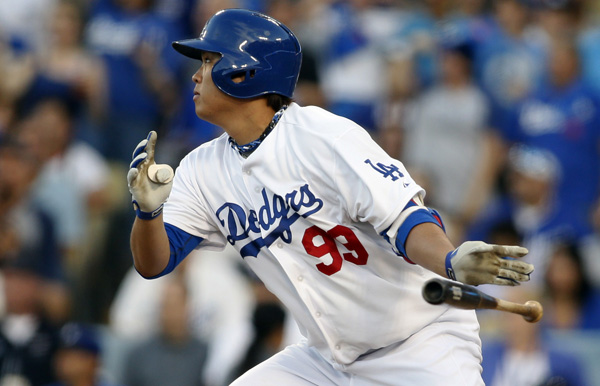 Ryu Hyun-jin of the Los Angeles Dodgers failed to impress fans - those in the United States and in South Korea who supported his MLB postseason debut via television Monday morning - in Game 3 of the National League Division Series against the Atlanta Braves as he gave up four runs in three innings. However, the Dodgers’ big-name bats overcame some tentative pitching by the rookie, giving the Dodgers a 13-6 victory for a 2-1 lead in the best-of five series.

Ryu, whose average first inning ERA was 5.10 in the regular season, again struggled in the first inning. He gave up a double to Justin Upton with one out and Evan Gattis drove in the first run of the game with a single. Ryu then walked Brian McCann, and Chris Johnson singled to score Gattis.

Ryu’s best performance of the game came in the second inning - but as a hitter, not a pitcher. With a bases-loaded, one-out situation, he hit a sacrifice fly to right field to drive in the Dodgers’ first run and became the first Korean pitcher with an RBI in a postseason game.

Before the game, Ryu had his first bullpen pitching session on Friday. Because he never had bullpen sessions during the regular season, some speculated that Ryu might be injured because Dodgers’ manager Don Mattingly, the team’s medical team and even a trainer carefully observed Ryu, but both Ryu and Mattingly denied it in a pregame interview.

But Dodgers’ commentator Vin Scully said Ryu possibly has elbow and back injuries when he was replaced with a pinch-hitter in the third inning and TBS commentators said Ryu’s pitching delivery looked uncomfortable for him. In addition to being shaky on the mound, Ryu made two major mistakes in the field before giving way to Chris Capuano, who spent most of the season in the starting rotation before moving to the bullpen.

Despite Ryu’s struggles, the Dodgers’ bats led the way. Carl Crawford hit a three-run homer, Juan Uribe added a two-run shot, and Hanley Ramirez and Yasiel Puig each had three hits and scored three times on a big night at the plate for the Dodgers, who matched a franchise record for runs in a postseason game. Brooklyn beat the New York Yankees, 13-8, in Game 2 of the 1956 World Series.

‘’It was a total team effort,’’ Crawford said. ‘’Guys were swinging the bat well. That’s what it’s going to take: 25 guys to do the job and come together and play well.’’

Los Angeles can advance to the NL Championship Series with a victory at home in Game 4 on Monday night. Ricky Nolasco will pitch for the Dodgers against veteran Freddy Garcia.

Crawford made the play of the game when he tumbled head over heels and onto his head to catch an eighth-inning foul ball at the low retaining wall in left field. The speedy leadoff man also scored three times, including once in the eighth when the Dodgers made it 13-4.

Chris Capuano won in relief in a game that took four hours, one minute. The 13 runs allowed by the Braves equaled the most in club history for a postseason game.

Los Angeles rallied in the third to regain the lead for good after Atlanta tied it in the top of the inning. After that, the Braves didn’t manage much besides Jason Heyward’s two-run homer in the ninth.