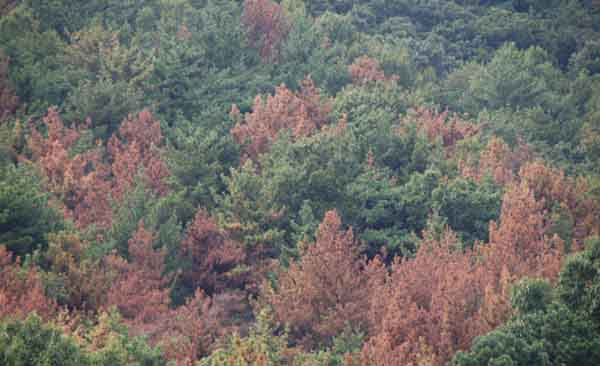 A mountain in Daedong neighborhood, South Gyeongsang’s Gimhae, sees the spread of pine wilt, which turns green pines into a grayish brown. The disease has led to the death of over 560,000 pine trees nationwide. [NEWSIS]

Many evergreens are now ever-brown as more and more pine trees have succumbed to a disease called pine wilt.

The disease, caused by a worm called nematode and spread by beetles, has led to the death of 560,000 pine trees so far this year, according to the Korea Forest Service.

The worm invades the vascular vessels of the trees, causing the xylem to fail to transport water to the foliage and resulting in the wilting of leaves and branches and, sometimes, the death of the entire tree.

One of the affected areas is Gimhae, South Gyeongsang. On a construction site near the city’s Daedong Interchange, a string of grayish brown pines on a mountain can be spotted from a distance. They have died from the disease.

Although the affected trees account for a large swath of the mountain, no measures have been taken.

“We need to control a vast area, so we planned to divide the location into six,” said Lee Jin-woo, an employer of the forest management division at the Gimhae City office. “If we are to request an agency to undergo the pest control process, it will take at least three months.”

The state-run forest institute blames the prolonged and unusually high temperatures during the summer drought.

As the nematodes progress and multiply, the tree turns tan and eventually brown. The wood of the tree will also become very light and have almost no sap or sticky resins.

There is no treatment once a pine is infested with the disease.

Prevention is the best approach, and a dead tree should be cut down because the pathogen is contagious. But some local governments in the infected areas are dawdling.

“Eliminating dead trees is important to prevent a further spread, but some cities are not as active as they should be,” said Yoon Byung-hyun, an employee of the pest control division at the forest institute.