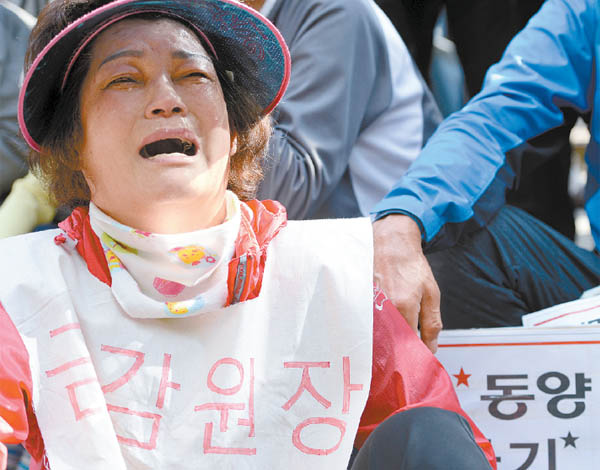 A woman cries at a rally protesting the financial regulator’s lax oversight of the Tongyang Group’s sales of commercial paper and bonds yesterday at the Financial Supervisory Service in Yeouido, western Seoul. [NEWS1]

Prosecutors Tuesday prohibited Tongyang Group Chairman Hyun Jae-hyun and Tongyang Securities CEO Chung Jin-seok from leaving the country, a day after the Citizens’ Coalition of Economic Justice, a civic group, filed a complaint against them for alleged fraud and breach of trust.

The prosecution said Special Investigation Team I at the Seoul Central District Prosecutors’ Office will lead an investigation into alleged malpractices, a move legal experts said was unusually swift.

“It is highly unusual that the prosecution handed the case to the special investigation team on the same day it received a complaint,” said judge-turned-lawyer Lee Sang-won.

“The move can be seen as the prosecution’s determination to discover hidden business irregularities at the group.”

The prosecutors are expected to look into whether the group deceived private investors by not informing them of the financial shakiness of its affiliates as it sold its commercial paper and corporate bonds.

Chairman Hyun allegedly ordered Tongyang Securities employees to advise investors to buy the bonds, especially in Tongyang Cement, which had a lower debt-to-equity ratio than other group affiliates.

From July to September this year, the troubled chaebol issued a total of 157 billion won ($146.4 million) worth of asset-based commercial paper to investors through Tongyang Securities, using shares of Tongyang Cement & Energyas collateral. The value of that commercial paper is now dubious.

But on Oct. 1, Tongyang Cement & Energyunexpectedly filed for court receivership, and if the program is accepted then the value of Tongyang Cement & Energyshares used as collateral could become worthless. After five Tongyang affiliates filed for court receivership last week, about 49,000 retail investors who purchased commercial paper and bonds issued by the debt-saddled group are now on the brink of losing an estimated 2.3 trillion won in total. Tongyang is the nation’s 38th largest conglomerate with 31 business units.

News reports saying that Hyun’s wife allegedly withdrew billions of won from a safe-deposit box at a brokerage firm have aggravated the loss of public trust in the firm.

Aside from money losses, the scandal claimed its first life last week.

A 42-year-old worker at Tongyang Securities’ Jeju branch committed suicide on Oct. 2, leaving a suicide note asking Chairman Hyun how he could have asked his staff to deceive their own customers. In the note, the worker said she felt personally responsible for her clients’ losses. She was found dead inside her car, asphyxiated from burned charcoal briquettes.

“Chairman, you can’t do this to individual clients and to us ... I apologize for not taking responsibility to the end. Chairman, please return all the money to clients,” the note read.