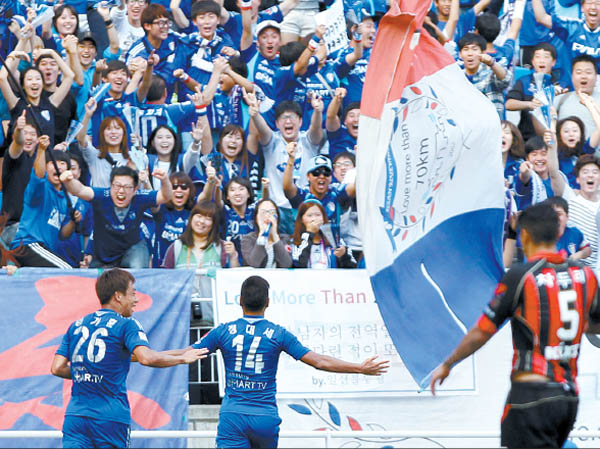 Forwards Yeom Ki-hun, who returned to the team after finishing his military service, and Jong Tae-se, a North Korean national team striker, led the Suwon Bluewings to a 2-0 victory yesterday over their biggest rival, FC Seoul.

After its win in the 32nd round of the 2013 K-League Classic yesterday, Suwon has 50 points from its record of 14 wins, eight draws and nine losses, and trails FC Seoul by one point.

Brazilian striker Natanael Santos scored the team’s first goal in the 57th minute and Jong, who was kicked out of Suwon’s April 14 match against FC Seoul for receiving two yellow cards in the first half, scored in the 82nd minute. Veteran Yeom also contributed to the win with an assist to Jong.

Jong was cited as the cause of the April loss because the Bluewings had to play with only 10 players after he was kicked off the field in the 39th minute. Ahead of this so-called super match, he said, “I will beg for pardon on bent knees to fans for April’s mistake if I score a goal in this game.”

But Suwon head coach Seo Jung-won didn’t include him in his best 11. Jong recently recovered from a three-month-long foot injury and had scored two goals against the Pohang Steelers on Sunday.

“I thought putting in Jong in the second half would give more impact to the game,” Seo said.

Jong appeared on the field in the 61st minute and fired a shot into Seoul’s goal with his right foot in the penalty area after receiving a pass from Yeom in the 82nd minute. After scoring, he approached Suwon’s fans and made a deep bow to them.

“Today’s victory is worth six points,” Jong said. “I’m very glad that I was able to keep the promise I made before the game.”

Veteran striker Yeom finished his military service on Sept. 28. He watched Suwon’s 2-1 loss to Seoul in August. “I really felt bad when I saw my team losing to FC Seoul,” Yeom said. “I was waiting for this game.”

Yeom made a decent return in front of his 30,000 home fans. He started the game as a left wing and showed off his stamina by playing a full game with his sharp left foot.

“When Yeom possessed the ball, more than one FC Seoul player had to defend him,” Seo said. “And that gave us many chances on the other side of the field. We now are able to play true Suwon football because Yeom is back on our roster.”

Yeom was named as the MVP of the game.

“It was difficult to battle with FC Seoul’s defender Cha Du-ri because he never gets tired with great stamina,” Yeom said.

“I think I should do some weight training later to beat Cha. Coach Seo gave me the role of managing the game in the midfield area while keeping the ball as long as we can during the game, and I think I did it pretty well. I think I was able to gain such experience when I played in K-League challenge games when I was in the military.”