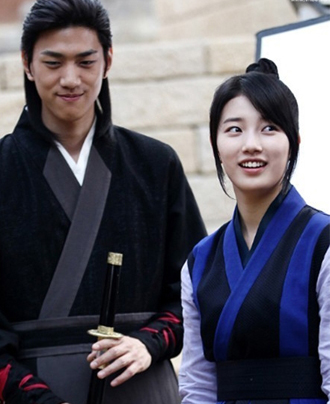 Suzy of the girl group Miss A is rumored to have been dating actor Sung Joon, who she met while filming the drama “Gu Family Book” on MBC.

Local media reported on their possible relationship by releasing photos of the two taken together late last month.

The two were seen together with a friend of Suzy’s in Seorae Village, Banpo, southern Seoul, and then again in Cheongdam-dong for dinner and drinks afterward.

As they were leaving the bar, Sung Joon was spotted putting his arm around Suzy’s shoulder, and she didn’t push him away, but put her hand on his. After walking down the alleyway a little, the two got into a car and left the scene.

However, an official at JYP Entertainment, Suzy’s agency, has reportedly denied rumors that she is dating and said the two are just good friends.