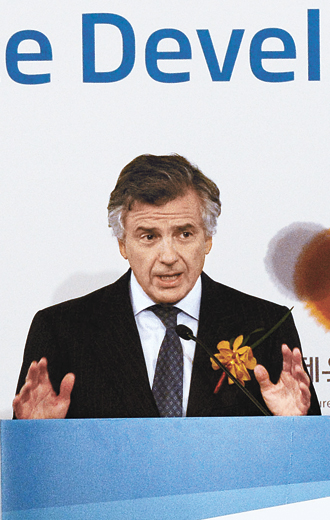 Juan Antonio Samaranch Jr., an active IOC member, gives a speech on Oct. 8 in a conference organized by the International Sport Cooperation Center of Korea at Conrad Hotel in Seoul. [NEWSIS]

Any Korean who was old enough to watch television in 1981 has a fond memory of the late Juan Antonio Samaranch, president of the International Olympic Committee, declaring Seoul as the host city of the 1988 Summer Games. Seoul is more than just a city to his namesake son, Juan Antonio Samaranch Jr., also an active IOC member.

Recently in Seoul for a conference organized by the International Sport Cooperation Center of Korea, Samaranch told the JoongAng Ilbo that he feels at home here, just as his father did. Since his first visit in 1986 for the Asian Games, Samaranch said he has been impressed by the fast growth of the country, which won hosting rights for the 2018 Pyeongchang Winter Games on its third consecutive bid for the games.

Samaranch noted that two Asian neighbors, Korea and Japan, are hosting the 2018 Winter and 2020 Summer Games respectively, which he described as a “new trend toward Asia.” At last month’s IOC session in Buenos Aires, Argentina, Tokyo defeated Madrid, Spain, whose bidding team was led by Samaranch. Asked about that, he shrugged and said, “Well, accepting defeat is a part of sportism.”

Concerning another big winner at the latest IOC Session, new IOC President Thomas Bach, Samaranch was enthusiastic as he described the new leader as “full of ideas” and “ready to leave a footprint in the IOC’s evolution.”

At the conference on global athletes’ development on Oct. 8, Samaranch was accompanied by three IOC colleagues - Claudia Bokel of Germany, who heads the Athletes’ Commission; Rita Subowo of Indonesia; and Barry Maister of New Zealand. The conference was officially endorsed and supported by the IOC.

At the conference, Samaranch emphasized the importance of athletes’ post-career education. “Athletes are not machines,” he said. “Competition is their DNA and they can do better when we support them with the right career program.”

Bokel, who also sits on the IOC’s Executive Board with Samaranch, knows the athletic life; he is a fencer who won an Olympic silver medal in 2004.

The IOC members were joined by the country’s leading sports stars such as the Olympic table tennis champion Hyun Jung-hwa and the shooting gold medalist Jin Jong-oh.

Also present were Park Yong-sung, the honorary chairman of the Korea Olympic Committee, and Elisa Lee, a table-tennis legend and now a member of the National Assembly, who is noted as having taught the sport to President Park Geun-hye when the president was still a teenager.