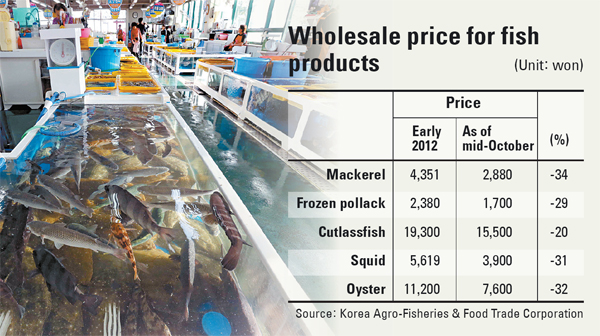 In a harbor fish market in Jung District, Incheon, lights along the fish stalls were shining to attract customers Friday evening. In contrast to the mood created by the bright lights, there were hardly more than a dozen customers.

“Just a few months ago, we had to keep the stall open well past midnight to accommodate,” says Jung Gyung-suk, a 57-year-old fishmonger who has run a stall for almost three decades. “All day long, I have had only three groups of customers, about 10 people,” said the somber-looking restaurant owner as she shuttered her stall at about 10 p.m.

Jung said the already sluggish sales have gotten worse since it was revealed last week that some seafood products from Japan exceeded the standard radiation level.

In a desperate effort to revive sales and ease growing safety concerns, Jung said she replaced all of her fish products with ones that are either domestic or imported from China or Russia, but soon discovered it was to no avail.

Another fish-stall owner named Cho Myung-son told the JoongAng Ilbo that her customers have fallen by more than 30 percent and she is losing money.

Amid growing concerns over the safety of fish products following a series of revelations about radioactive water seeping into the Pacific Ocean from the Fukushima Daiichi nuclear plant, the domestic fish market has been hit hard by the dropping demand.

“Since August, we stopped supplying fish stalls with products caught in Japanese waters, but they continue to suffer,” said Lee Seung-bu, a dealer who distributes fish products to market stalls. He said his profits are off by more than 40 percent.

The fish market’s agony is being felt throughout the country, especially in Busan, Incheon and other coastal cities.

At another fish market in Suyeong District in Busan, the scene was similar to the Incheon market.

“All we sold yesterday was a single 1-kilogram [2.2-pound] gizzard shad, and that was it,” said Kim Gap-ja, a fish restaurant owner in Busan.

With sales of fish products showing no sign of recovering, fishermen are refusing to go out, saying it costs them more to run their ships than they make from their catch.

“About 200 fishing ships have been anchored [at a harbor in Suseong District] for days,” said fisherman Kim Su-hwan.

“The situation has gotten so serious that the government must wage public campaigns to lift public consumption of seafood products,” said Jang Young-soo, dean of the College of Fisheries Science at Pukyong National University in Busan.