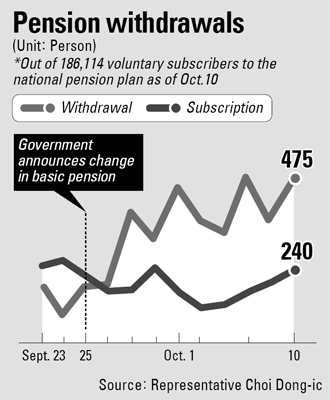 The revised basic pension scheme announced by the government last month is prompting many voluntary national pension subscribers to discard their current pension membership, as many believe withdrawing from the program will be more cost-effective than continuing with their contributions.

Since the Park Geun-hye administration announced a revised basic pension plan for seniors aged 65 and older, which is to be introduced in July next year, a daily average of 365 voluntary subscribers to the national pension plan have withdrawn from the scheme between Sept. 25 until last Thursday, Representative Choi Dong-ic of the Democratic Party said yesterday.

According to the opposition lawmaker, that number is 4.5 times higher than the average figure in the past five years, which came to 82.

Voluntary national pension subscribers refer to those who are not obligated to contribute to the national plan, such as full-time housewives or students who have no independent source of income.

The scaled-downed plan is a big retreat from President Park’s campaign pledge last year when she promised to provide all seniors aged 65 and older with a 200,000 won monthly allowance in basic pension regardless of income level.

“The revised basic pension is inflicting heavy damage to the foundation of the national pension system,” said Choi, who is visually impaired.

“The rise in withdrawal numbers from voluntary subscribers could prompt self-employed subscribers to stop paying,” continued Choi, “we need a new overhaul into the revised scheme.”

Chin Young, 62, who authored the original basic pension promise in last year’s presidential election for then-candidate Park, stepped down from his ministerial post on Sept. 30 because he could not persuade the opposition to accept the basic pension plan he opposed.

The former minister remarked that resigning was a matter of keeping his conscience intact.