Park proposes a vision of Eurasia

Park proposes a vision of Eurasia 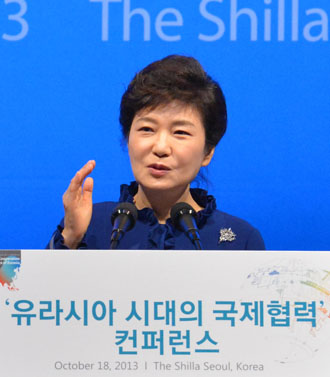 President Park Geun-hye speaks at the 2013 International Conference on Global Cooperation in the Era of Eurasia in Seoul yesterday. [NEWSIS]

President Park Geun-hye proposed a new vision yesterday for cooperation among Europe and Asia, a “Eurasia initiative,” at an international conference held in central Seoul.

As part of the vision, Park proposed a Silk Road Express, a network of roads and railways running from Busan through South and North Korea, Russia and China, and onto Europe.

“A new Eurasia will provide us with fresh investments and job opportunities, and will play the role of a continent that will lead for generations to come,” said Park in a speech at the 2013 International Conference on Global Cooperation in the Era of Eurasia at the Shilla Hotel, hosted by the Korea Institute for International Economic Policy.

Park proposed to restore links between Europe and Central and East Asia that were severed during the cold war, building a peaceful community based on economic cooperation and shared innovation.

For this to happen, Park asked Eurasian countries to support her key Asia policies: the trust-building process to deal with North Korea and the Northeast Asia peace initiative. She said peace in this region is a key to realizing any potential of co-prosperity and sustainable economic growth in Eurasia.

Park further encouraged Russia, China and Korea to work together to build a Eurasian economic bloc to bolster sustainable economic growth in the region.

“A large single market could be created through speeding up a Korea-China-Japan trilateral free trade agreement, which is currently being discussed,” she said, and linking it to other regional trade accords such as the Regional Comprehensive Economic Partnership (RCEP) and the Trans-Pacific Partnership (TPP).

But she added that to “open up a new era of Eurasia” North Korea’s cooperation is a necessity.

“The Korea-China-Japan FTA, RCEP and TPP, if combined together, can be equivalent to an Asia-Pacific free trade agreement,” said Lee Kyeong-tae, an economics professor at the Korea University Graduate School of International Studies. “There is significance in that Russia, which has been left out in the movement for regional unity, has been included into the bigger picture.”

A Blue House official pointed out that this was President Park’s “message to Russia.”

Park is slated to meet with Russian President Vladimir Putin at a Russia-Korea summit in Seoul next month, which is expected to bring up discussion cooperation between South and North Korea and Russia on energy and gas resources.