‘Stress made me do it,’ a Peeping Tom contends

‘Stress made me do it,’ a Peeping Tom contends 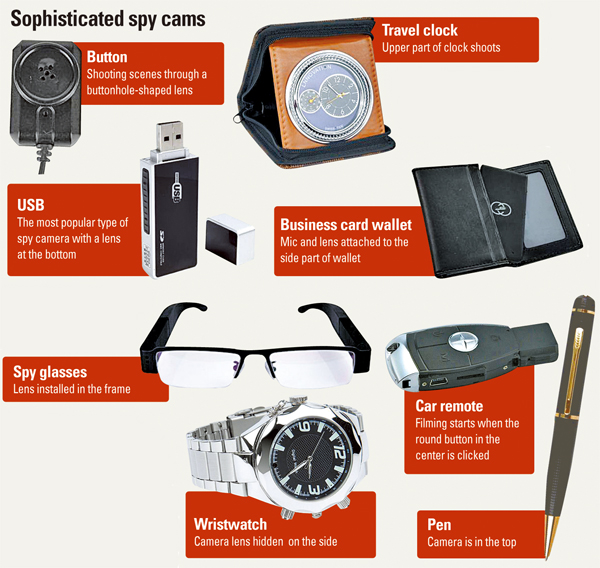 An increasing number of women are falling victim to sex crimes involving spy cameras, a recent police report showed, and the offenders are often young men in their 20s and 30s.

For over a month, the JoongAng Ilbo contacted Internet users who upload spy cam video files of women in order to interview them about their hobby. At the end of last month, one of the men, renowned in peeper circles for his high-quality, surreptitiously filmed videos of women in public toilets, agreed to talk.

In an interview conducted on Oct. 2 at a cafe in Seoul’s Mapo District, the man said he is in his early 30s and is studying to prepare for the civil service exam.

“It has become a habit for me to use a hidden camera to secretly videotape women,” he said. “I told myself I should stop, but then I realize that I’m doing it again. I know it’s pathetic.”

He said he started out as a peeper at public restrooms in older buildings with a couple of toilet stalls used by both women and men. But his compulsion deepened, and he thinks the stress of preparing for the exam was a contributing factor.

“I started using the spy camera last year,” he said. “There is so much information on the Internet about spy cameras, so I could get it easily.”

He said he understands it is illegal to secretly spy on people and film them, but he relished the feeling of power he received by breaking the law. “Once you are in,” he said, “it’s hard to get out.”

He said he got more sophisticated in his spying methods and doesn’t fear getting caught.

“I don’t do the filming in real-time,” he said. “When the public restroom is empty, I set up my equipment and go back a few hours later to retrieve it. Some of the spy cameras are tiny and well-disguised, and it’s hard for anyone to see that it’s a camera.”

He insisted that peepers aren’t crazy. “Normal, average people are doing this to work off their frustration,” he said. “I know it’s a crime, and I feel uneasy and even guilty. It’s very hard to get out from under, but I really think I should stop. Recently, I erased all the files that I had accumulated.”

According to a National Police Agency report submitted recently to Representative You Dae-woon of the Democratic Party, office workers are the largest group of offenders who got caught using hidden cameras to commit sex crimes. Among the 2,723 offenders investigated last year, 846 were office workers while 380 were students. Men between the ages of 20 to 40 comprised 60 percent of the total number of peepers, while 511 were between the ages of 41 to 60.

The police said an increasing number of professionals have been caught. In 2009, 27 offenders were professors, doctors or lawyers. That number went up to 58 last year.

Last May, a 51-year-old professor from Korea University was apprehended while filming up a woman’s skirt. He resigned.

“People working in specialized professions tend to suppress their sexual desires because of their social status,” said Paul Kyuman Chae, professor of psychology at Sungshin Women’s University. “Their sexual urges aren’t properly expressed and they commit these crimes.”

While the police try to catch offenders in the act at trains stations and shopping malls, efforts to block sharing of the films or photos on the Internet aren’t getting very far. The files are often uploaded and downloaded through Korean-language adult sites that use servers in countries where this type of adult content is legal such as the U.S., Japan and Australia.

Among those sites, Soranet is a Mecca of spy cam files. The site has an estimated 1 million members and new spy cam films are uploaded daily. The effort by Korean law enforcement authorities to shut down the site has been ongoing for 14 years.

In 2004, Seoul’s Gangnam Police Precinct arrested the operators of the site but failed to apprehend its mastermind. The police believe the suspect is a Korean man with an Australian immigration visa.

In 2010, the Korea Communications Standards Commission, at the request of the Korean police, blocked Koreans from accessing the site. But in a game of cat and mouse, it continued to change its Internet address and is easily accessed by using foreign search engines, including Google.

“They back up their servers in advance, so even if their site is shut down they use a new Internet address and redirect members,” said a police official. “To hunt down the uploaders of those illegal videos, we would have to confiscate servers in foreign countries. We would need the cooperation of the countries’ investigative authorities, and that’s not easy.”

Once a video is uploaded, it takes only seconds to spread. They often go viral through file-sharing sites in Korea. Files are purchased for up to 300 won ($0.28).

“We need to strengthen cooperation with the Korea Communications Commission to shut down access to Soranet in real-time. That will be a more realistic solution,” said Lee Byeong-gwi, head of the cybercrime investigation team of the National Police Agency.

There’s an offline trade in more specialized, high-resolution spy cam videos, and people are willing to pay up to 150,000 won for them. The JoongAng Ilbo contacted a 26-year-old university student last month who is in that business.

“I bought a state-of-art camera and hunted for locations among the houses in my neighborhood,” he said. The samples he showed included secret recordings of women taking showers and using toilets.

Internet community sites also give advice on how to purchase spy cameras. Electronics stores in Yongsan are popular venues and some actually state on their signboards that they sell spy cameras.

There is no legal grounds to stop the sale of spy cams because they are categorized as legitimate filming equipment. As long as they pass the technical specifications of the National Radio Research Agency under the Korea Communications Commission their sale is legal.

“We all know spy cameras are used for sex crimes, but there is no legal grounds to regulate them,” said Kim Seong-dong, head of the sex crime unit of the Yeongdeungpo Police. “It’s really hard for us to prevent these offenses.”