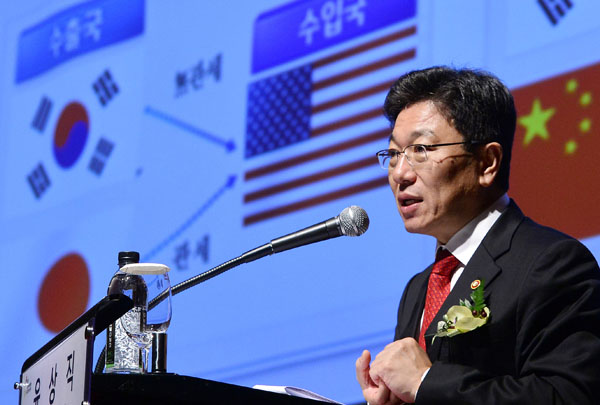 Trade Minister Yoon Sang-jick speaks at a lecture hosted by the Korea Standards Association yesterday at a hotel in southern Seoul. [NEWSIS]

Trade Minister Yoon Sang-jick expressed a cautious stance on joining the controversial Trans-Pacific Partnership in a lecture yesterday, saying the government should consider political factors more than economic ones.

When Korea might decide to join the world’s biggest free trade deal is a hot issue here because it would cause a major shift in trade policy, which relied on bilateral free trade agreements during the Lee Myung-bak administration.

“Since the ministry recently resumed FTA talks with Canada, New Zealand and Australia - major participants in the TPP - it would not be easy to discuss the TPP issue at the moment,” Yoon said. “We need to consider not only economic but also political factors with participating countries like India, China and Vietnam.”

Twelve countries, including the United States and Japan, are part of the TPP trade agreement that accounts for 38 percent of the world’s total GDP. It is aimed at integrating the Asian and Pacific economic blocs.

Korea currently has nine effective bilateral FTA deals with major economies like the United States and EU, and some emerging countries.

“It would be inevitable for Korea to join the huge deal,” said a high-ranking official at the Ministry of Strategy and Finance, who was responsible for the issue during the last administration.

The official warned the government of significant costs, too.

“If the deal is signed, Korea will have to handle a myriad of complex issues involving trade terms, because it has many FTA deals that overlap with the TPP.”

He added, for example, that with the United States, the government will have to consider which deal is more beneficial.