With new Genesis in the wings, a good Q3

With new Genesis in the wings, a good Q3

The next-generation Genesis is the first model produced under Hyundai’s new “Fluidic Sculpture 2.0” design philosophy. Provided by the company

Hyundai Motor has high hopes that the next-generation Genesis scheduled to be rolled out next month will enhance its brand image in the luxury auto market and eventually boost profitability.

The nation’s largest automaker yesterday announced its third quarter earnings, with sales reaching 20.81 trillion won ($19.6 billion), a year-on-year increase of 6 percent, and operating profit at 2.01 trillion won, up 1.7 percent from a year ago on a consolidated basis.

Meanwhile, net profit was 2.25 trillion won in the third quarter, up 4 percent from 2.16 trillion won last year. Although third-quarter performance turned out to be better than in 2012, Hyundai said the company has been struggling in terms of profitability for the entire year.

Through the third quarter, Hyundai sold 3.5 million vehicles worldwide, up 9.9 percent compared to a year ago. As a result, its cumulative sales this year were also up 5.9 percent year-on-year to reach 65.36 trillion won. 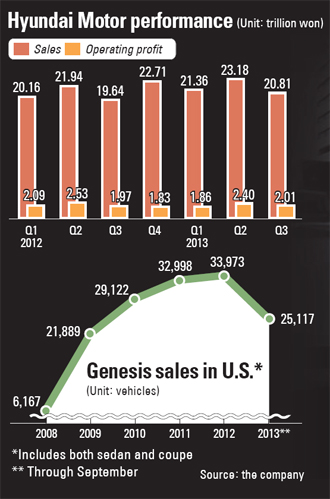 Hyundai blamed the weak profitability on partial strikes at local plants, rising labor costs and a massive recall in the first quarter.

Before announcing its third-quarter performance, Hyundai also presented a preview showcase on the second-generation Genesis at its Namyang R&D Center in Hwaseong, Gyeonggi, highlighting that the model is at the forefront of reaching the goal proposed by Hyundai Motor Group Chairman Chung Mong-koo.

Chung, who is on a business trip to Europe, has continually emphasized the need to focus on improving brand value and appealing to customers based on high product quality.

Industry insiders have been saying Hyundai’s effort to sell luxury vehicles should help profitability because they have larger profit margins than smaller cars.

Since its introduction in 2008, the Genesis has earned a good reputation, grabbing awards like the 2009 North American Car of the Year. The automaker’s first rear-wheel drive sedan has sold 250,000 units.

“As the first-generation Genesis, BH, was aimed to develop the company’s first rear-wheel drive vehicle for the luxury auto market, the second generation was developed to compete with other luxury models, like the BMW 5-Series and Mercedes-Benz E-Class,” said Hwang Chung-yul, the senior vice president at Hyundai who managed the DH project.

Hyundai said the new Genesis will be the first model produced under its new “Fluidic Sculpture 2.0” design philosophy that is highlighted with a hexagonal front grille believed to be taken from the HCD-14 Genesis concept car shown at the Detroit auto show earlier this year.

The model also will be Hyundai’s first all-wheel-drive sedan, equipped with HTRAC, an electronic all-wheel-drive system that controls torque between the front and rear axles depending on road conditions, according to Hyundai.

It also will be the first Hyundai with rack-mounted motor driven electric power steering with a variable gear ratio.

Safety features include an emergency fastening device system, which tightly holds passengers in crashes, while an autonomous emergency braking system senses other vehicles to reduce the stopping distance in emergency situations and reduce speed based on data from the car’s navigation system

Convenience features include the world’s first car air-conditioner with carbon dioxide sensors, which controls carbon dioxide in the cabin, and a “smart trunk” that opens automatically when the driver stands in front of the trunk for three seconds.

Hyundai said the price of the vehicle has not been determined.

“All of Hyundai Motor’s research efforts have been used in the new Genesis with our engineers’ passion and sweat,” said Kwon Moon-sik, president of research and development at a press briefing at Namyang R&D Center. “The new Genesis will not only be the symbol of progress for Hyundai, but also for Korean automobiles.”